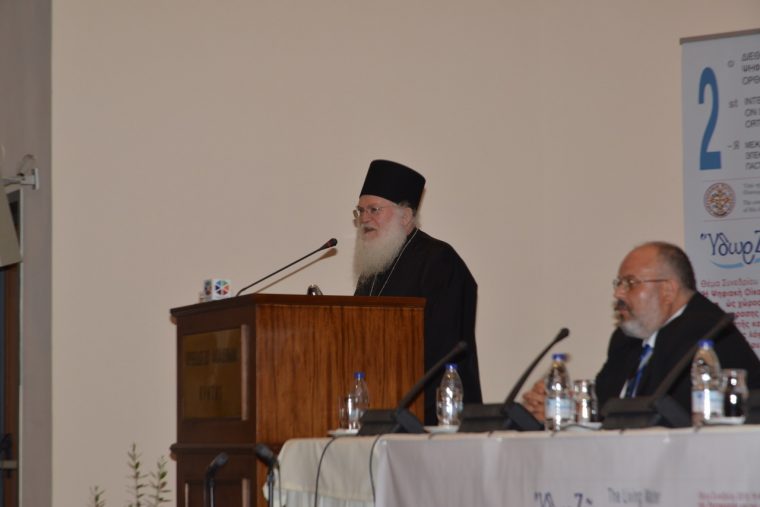 KOLYMPARI. CRETE. The extreme western point of the azure waters of the Cretan Sea, under the protection and care of the Lady of the Angels, devotion to whom is unfailing in this craggy outcrop of Crete, the birth-place of saints and heroes, was chosen to host the second international conference on digital media and Orthodox pastoral care.

Gathered under the aegis of His All-Holiness Bartholomew, the Ecumenical Patriarch, through the unstinting love of the local shepherd, His Eminence Amphilochios, and the paternal blessing and care of the Very Reverend Abbot of the Holy and Great Monastery of Vatopaidi, Elder Efraim, were 103 speakers from 17 countries, clergymen and lay people, representing all aspects of ecclesiastical life. The particular focus of the conference was the function and spread of digital media in contemporary society and in developments within the Church. 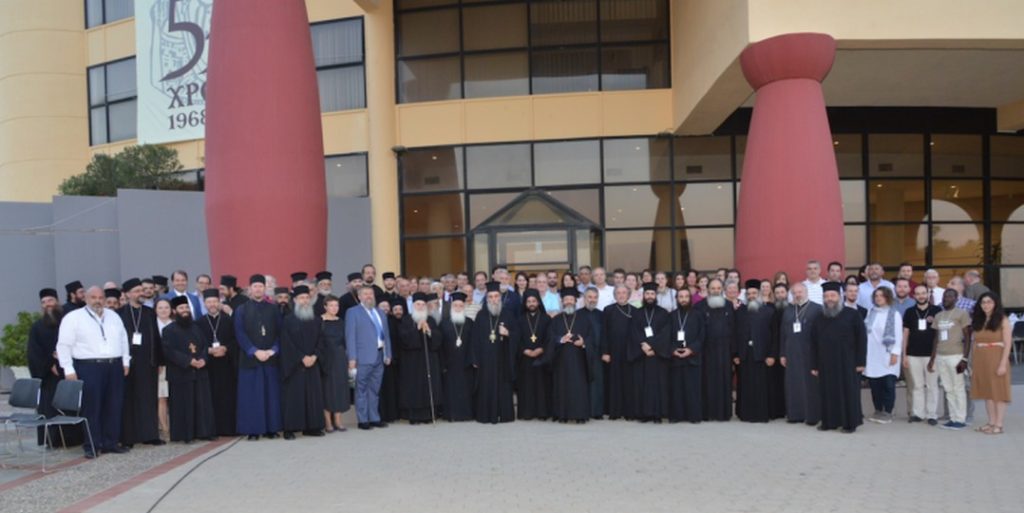 Commemorative photo of the Conference.

25 sessions were held in four days, from 17 to 20 July, either plenary or parallel. This was no mean feat! The efforts of the organizers and the self-discipline of the participants and, above all, Divine Grace, all contributed to the fruitful discussion of very serious issues, within a particularly restricted time-scale, given the magnitude of the subject, which included the position and attitude of the Church regarding the digital era.

At the first conference, in May 2015 in Athens, a start was made and the foundations were laid. The aim was that, at the second conference, here in Kolymbari, we would begin to build the structure through a productive approach to problems, so that solutions might appear to the problems and answers to the questions. 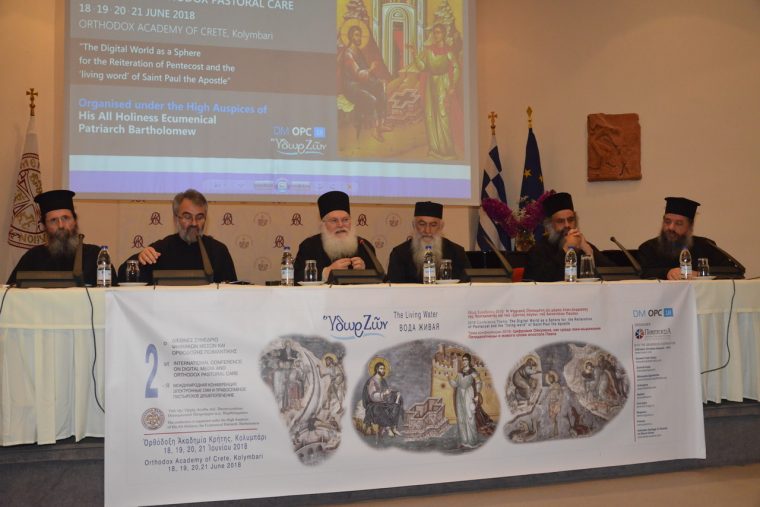 The anthropology of the Orthodox Church was set by the main speakers as the basis for the pastoral treatment of the challenges of the digital ecosystem.

At this conference, too, at the sessions and round tables, the dangers involved in the use of digital media were analysed, though this time in a more specialized form. Interest often centred on the special case of young people, because of their inexperience and their natural proclivity towards addiction.

The creation of a framework of education which will promote discernment, as well as the development of the personality, rather than any indiscriminate suppression of the use of digital media, were the main lines along which suggestions were made. 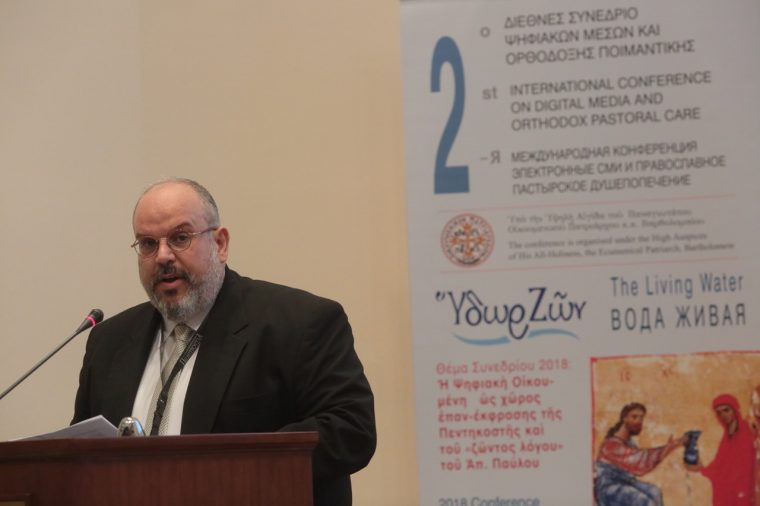 In this field, it was judged that collaboration with the family and the spiritual guide were of the essence, as was the Church’s particular concern with religious education. Interesting suggestions were made regarding the use of digital technology with the aim of creating favourable psycho-educational conditions for assisting young people to understand and accept the central concepts of the life in Christ.

Observations concerning the use of advertising by the Church were made in the same spirit. 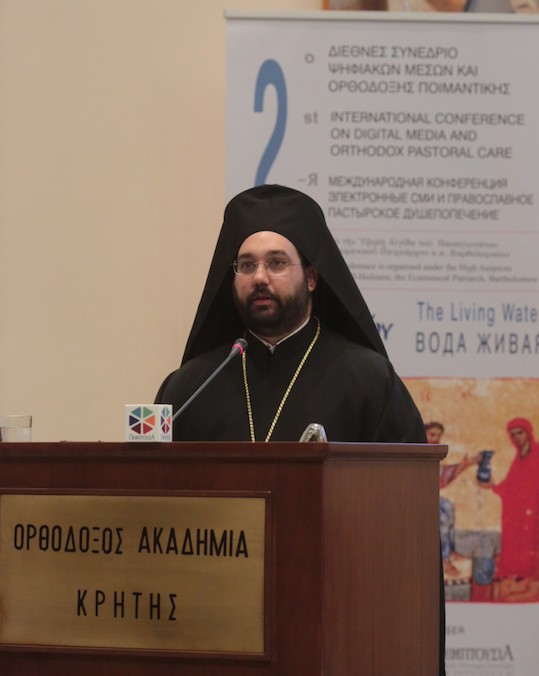 The practice of fasting as a means of self-control over our passions and habits and as a way of liberating and expanding our sensory perceptions was suggested by a good number of speakers and attendees, with the aim of dealing ascetically with the use of digital media.

The virtues of self-reproach and self-examination, derived from the treasury of the Orthodox niptic tradition, were projected as the bases for the character building of digital media users, as a way of dealing with all kinds of temptation. 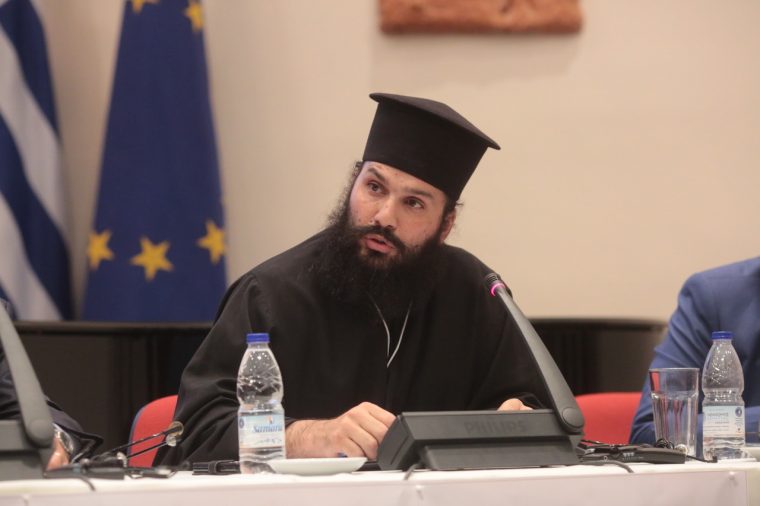 The treatment of ecclesiastical news services and reporting, the dangers which lie therein, the manner in which they should be served, as well as ethical and moral issues were all addressed by specialists.

Serious comments were expressed regarding the relationship between the official Church and personal/ independent initiatives in the digital media. In the realm of missionary work, the new opportunities generated by digital media were highlighted, given that these have brought overwhelming changes to the practices which have been applied until now.

Notice was taken of the dangers arising from groups which, with a positive or negative religious or ecclesiastical label, promote their own interests. Suggestions were made for initiatives on the part of the Church concerning other burning questions, such as bioethics, which would involve the establishment of special committees, conferences and programmes. 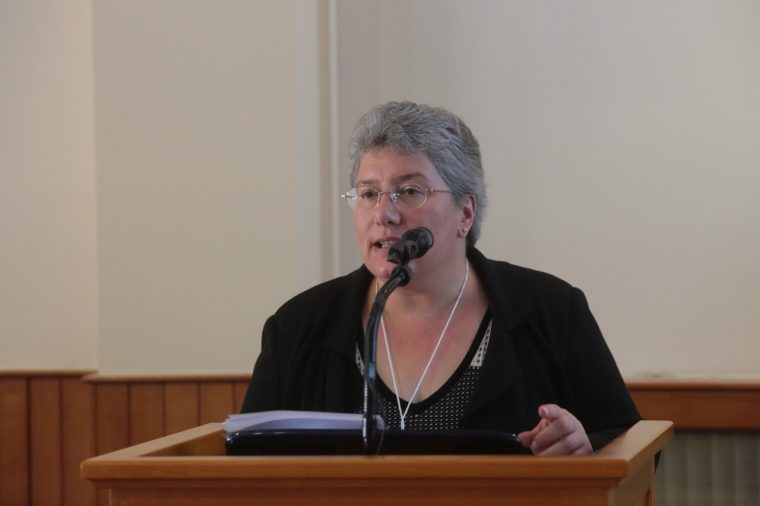 On the issue of broadcasting services on digital media, reference was made to the fact that, in certain cases, it creates ecclesiastical and pastoral problems. It was therefore suggested that the matter be re-examined in the spirit of a more discreet treatment which would preserve the sanctity of the sacraments and protect the user of digital media from the temptation of a harmful form of spiritual, media consumerism.

A common denominator for the foundation of an authentic ecclesiastical journalistic code of conduct, of the missionary use of digital media and the transmission of acts of worship by them, is the quest for truth and respect for the sacramental life, always in combination with the protection of individuals and their freedom. 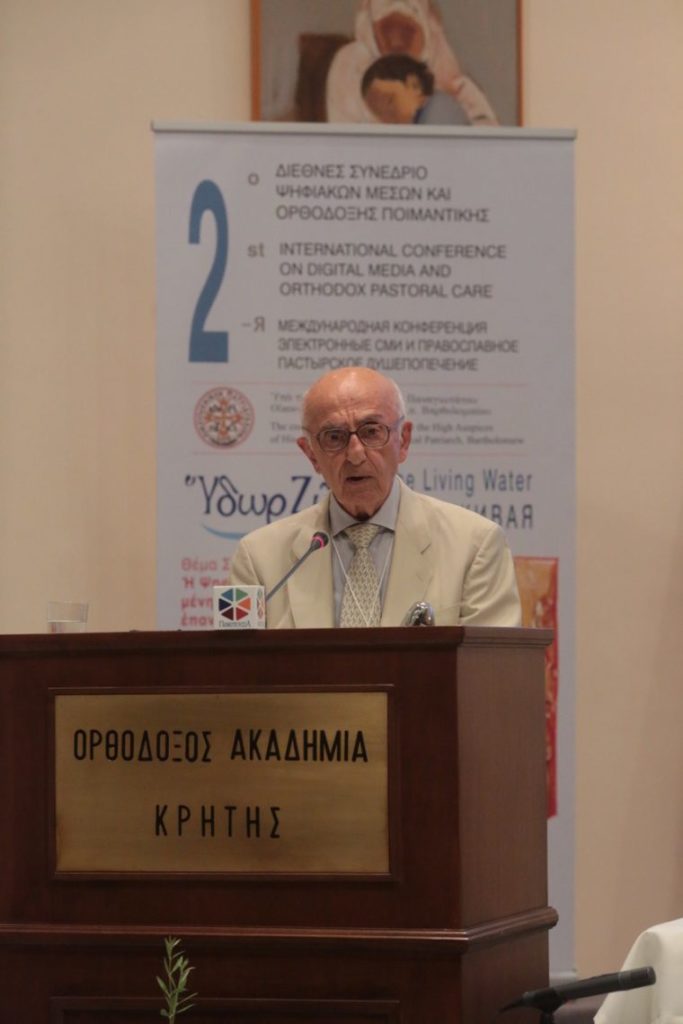 In the spirit of the above, the need was expressed for the creation of a Church news agency which would meet a need which exists in the Orthodox sphere. It was therefore announced that, as of the coming autumn, a new international Church information agency would be formed, under the name ‘Orthodoxy’.

Of particular value were the papers which dealt with the presence of the official Church on the internet so far, through the various sites of the individual Churches. It was noted that, despite a generally valiant effort, much work remains to be done if these sites are to respond properly on both the pastoral and theological level. 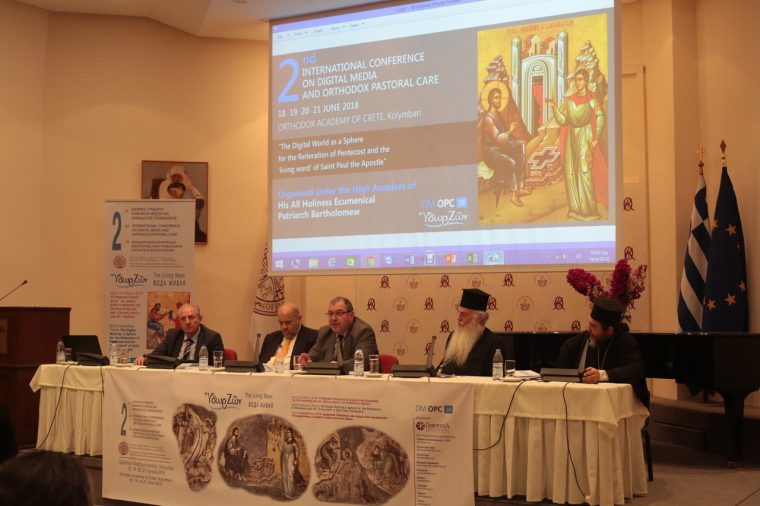 Observations regarding the inadequacy of the provision of Biblical and Patristic sources in digital form to people involved in the Church and, in particular, theology, were especially telling. The suggestions which were made were notable for their practical value.

As regards Church singing, it was remarked that, historically, every technical development had been embraced and put to use: writing, printing, the radio and television. Modern digital media offers many new ways of communicating and new tools.

The pastoral answer to the ever-lurking dangers, in keeping with the measured approach of our Church, is that there should be protection against possible excesses and a maintenance of the required balance, so that the vast potential may be put to the best use. 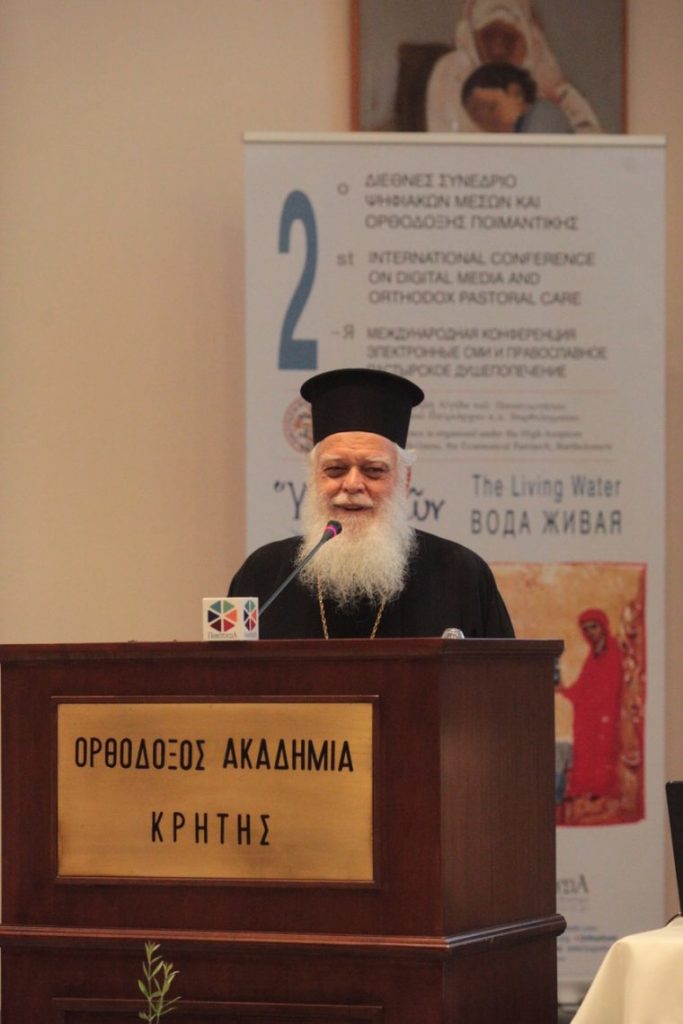 Special weight was given at this conference to the issue of the self and the person within the digital ecosystem, both from the psychological and also, mainly, from the theological and pastoral point of view. Lots of papers led with the concept of the person/self, and round table discussions on a variety of subjects were also concerned with it.

It was noted that extreme virtualization can dislocate not only the nature of things and the senses, but also people themselves. It can affect the Orthodox ontology of the person and cause painful changes in identity. In our contemporary situation, extravagant virtualization involves the danger of trans-humanism and, thereafter, post-humanism.

If the Church is to utilize the great potential of digital media for its pastoral role, it must have recourse to the safety valve of ‘balanced minimization’ as regards the use and production of virtual imaging. 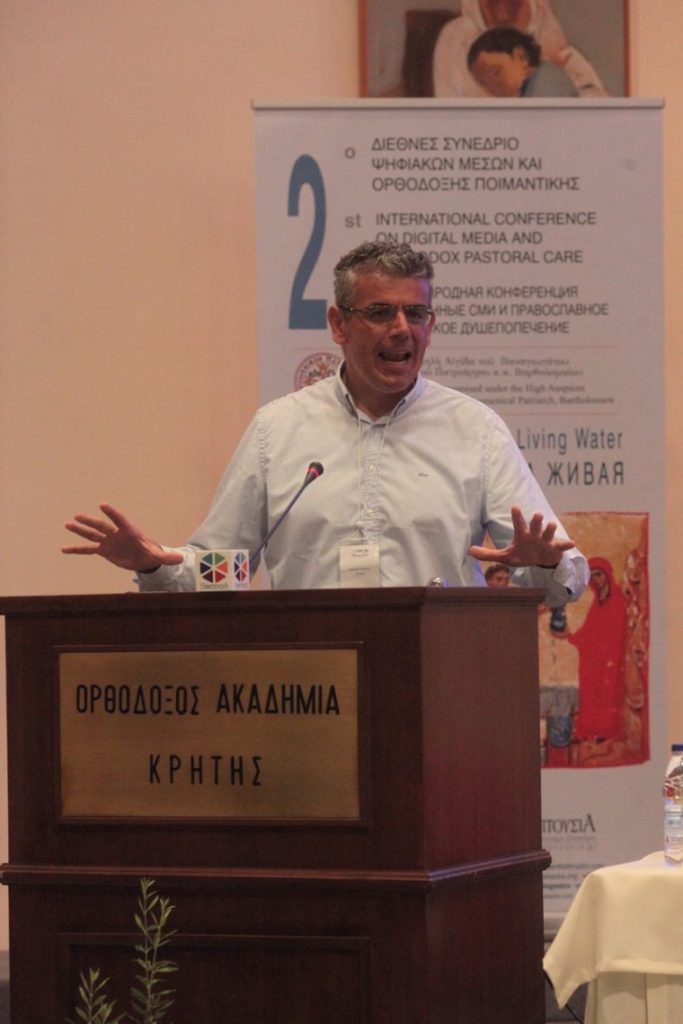 The burning question of artificial intelligence was addressed in relation to the search for a formalistic and deterministic intelligence which, reinforcing the cognitive capabilities of the human brain, would be able to solve routine problems. At the same time, issues arose concerning the nature of this enterprise, as well as its spiritual and moral dimension.

Particular emphasis was placed by the specialists on the fact that the tremendous potential for processing data would produce power, but, without people, this would not translate into meaning.

The centre of gravity for any consideration of the issue falls on the semantic web, in other words, once again, on people themselves. On this level, the human person is irreplaceable and bears the full responsibility for the bestowal of meaning in the use of both artificial intelligence as well as in every other advanced achievement of digital technology. 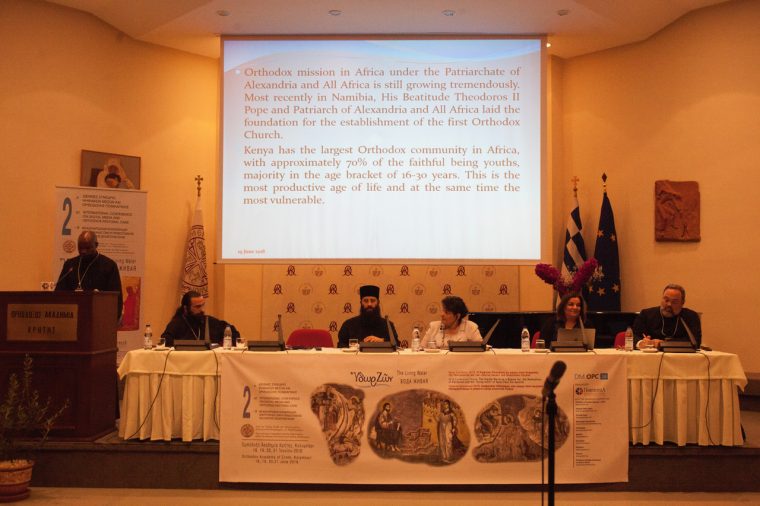 The theological, spiritual and pastoral understanding of all the above was informed by the relationship between God and people. To the degree that this relationship affects, inspires and guides the human person, we will find ways of using the digital ecosystem which will be appropriate for our creation in His image and our calling to be in His likeness.

The fulness of the sacramental, prayerful, and loving life of the Church was repeatedly highlighted at the conference, as being the fundamental element in the healthy and genuinely productive use of digital media. The value of expert knowledge was not ignored, nor was the need for continuous updates by qualified people in positions of responsibility. 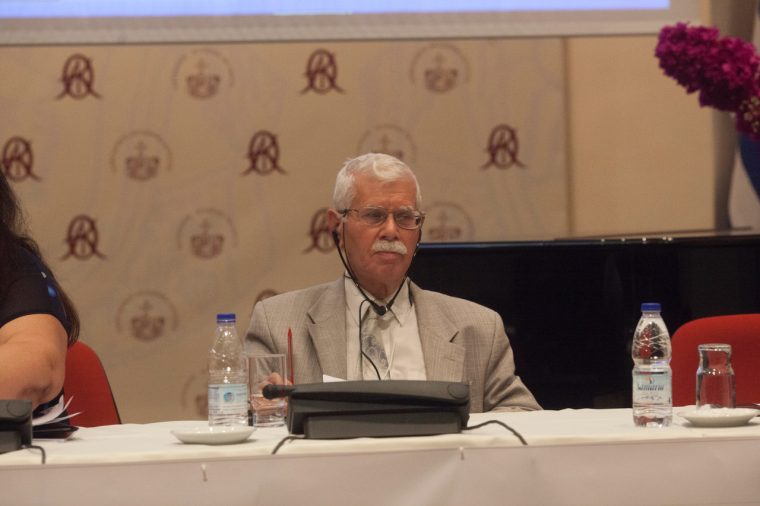 The sacrament of confession was proposed as the criterion for the use of digital media by all Christians, clergy and laity. The opening of the heart in the sacrament of spiritual paternity protects the internet user from the pleasures of self-promotion, the cultivation of ideal and imaginary situations and the rejection of natural human relationships.

For these reasons the common position was agreed that digital media can provide valuable services to spiritual guidance, but in no instance should ever replace the sacrament of confession. 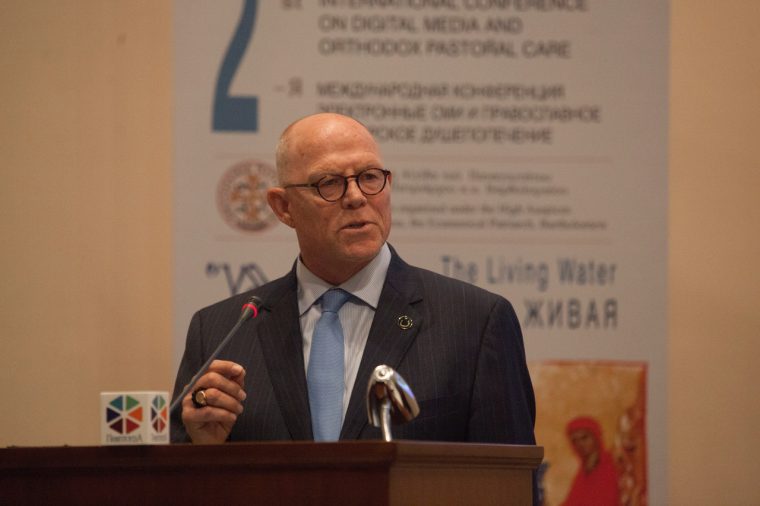 Our contact and discussions did not end here. Much was said, but much more also remains to be discussed in the future. We shall therefore continue under the auspices of the International Union of Digital Media for Orthodox Pastoral Care, which was announced by the director of Pemptousia, Mr. Nikolaos Gouraros, in his introduction.

During our time together here, we have experienced the fact that the digital world is an ocean of many waters. If people, the agents of discourse in this wonderful world, realize their aim of healing and unifying their hypostasis in Christ, then the Lord will bless the digital ecosystem and transform it into a time and place of peace, centred on the Kingdom to come. 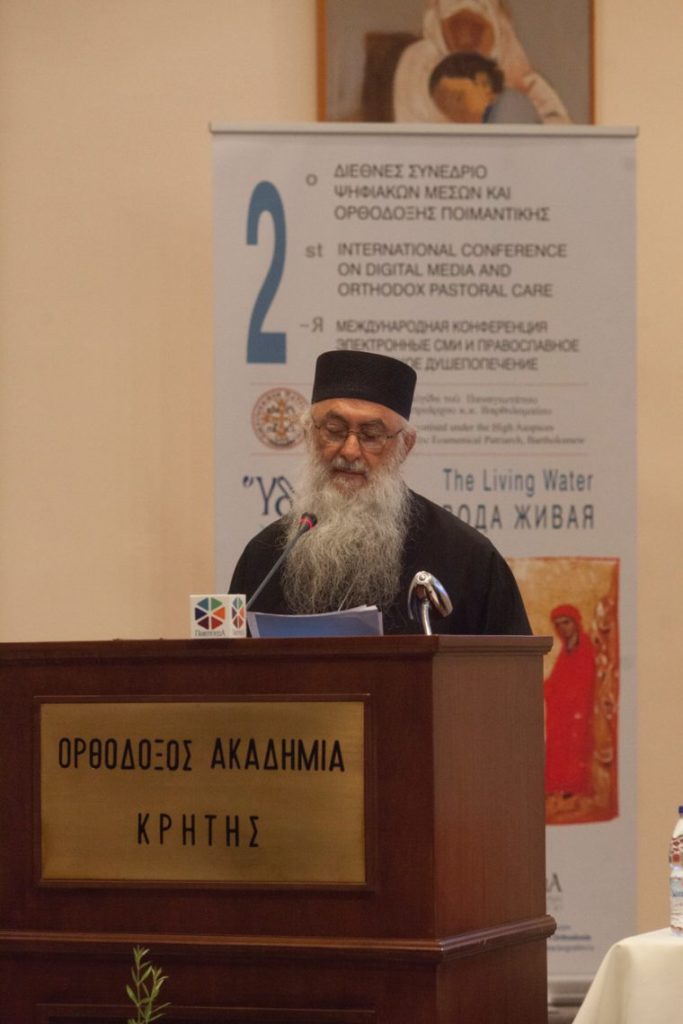 This sense has been reinforced over the past days by the sacrament of the Divine Eucharist in the Holy Metropolis of Gonia, in the house of Our Lady of the Angels, celebrated by Elder Efraim, the most venerable Abbot of the Holy and Great Monastery of Vatopaidi. 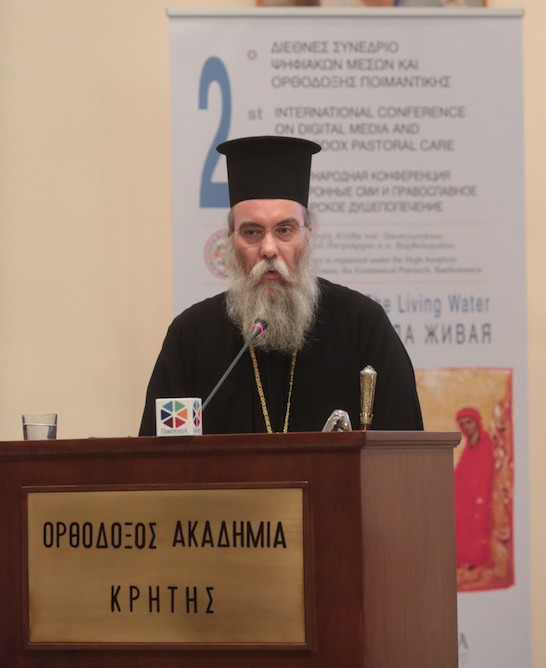 Metropolitan Amphilochios of Kissamos and Selino.