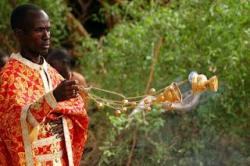 This summer, Father Vladimir and Matushka Suzanne Aleandro of Christ the Savior Church in Southbury, Connecticut, will head back to Kenya for their fourth mission trip with the Orthodox Christian Mission Center (OCMC). Father says he and Matushka’s work with the people of Turkana has deepened their faith and expanded their horizons.

“I grew up in an Italian household,” explains Father Vladimir. “My grandmother couldn’t read or write, but she could pray and I grew up watching her pray for missionaries who were all around the world. This stayed with me.”

In 1991, Father founded Christ the Savior parish with two families, and he and Matushka channeled their energies into building up the community in Southbury. In 2007, with their kids grown up, “no great obligations and nothing to impede us,” they contacted Presbytera Renee Ritsi at OCMC headquarters to inquire into missions service.

“We told Presbytera that we were open to going anywhere and that we wanted to go together as a team,” says Father Vladimir. Matushka Suzanne’s schedule as a teacher allowed them to travel in the summer. When they heard about the new mission being established in remote Turkana, Kenya, they signed up to go, with Father leading the team.

No one had ever ministered to the Turkana before, since they live near the Sudan border in an extremely isolated area. At the time, they were the last Kenyan tribe without an Orthodox presence. The Turkana received Father and Matushka warmly, giving them Turkana names: Papa “Emoru,” meaning “mountain,” and Mama “Appua,” which means “stream.” Through a series of divinely ordained events, a young Turkana man named Paul had converted to Orthodoxy and had been laying the groundwork for a church in the village of Lodwar. During Father Vladimir’s first trip to Kenya in 2007, he took part in Paul’s ordination to the diaconate. Eventually that young man became Father Vladimir Paul, the first priest to the Turkana people. (On a subsequent trip, Father Vladimir Aleandro also participated in the ordination of a second priest ministering in another remote town, Loupwala.)

In 2010, Father and Matushka traveled back to Kenya with a group of seminarians from Holy Cross Greek Orthodox School of Theology. “By that time we had seen five communities in Turkana established. We went with Father Martin Ritsi, preaching and catechizing.” When the Aleandros returned last year (2011), the number of Orthodox communities in Turkana villages had increased to thirteen.

“Here in the US, we live such isolated lives, within our own houses and yards,” notes Father Vladimir. “In Kenya, everything is communal—if the chief of the village becomes Orthodox, the clan does too. When I started preaching there my translator would say ‘it’s too short, they want more.’ My message would be transmitted to the next village by a runner who would travel by foot for an hour and a half to bring my sermon to the next community. So when I would arrive at that village, the people there had heard my message already.”

The Turkana people respond with joy to the message of Christ. “When you’re talking and preaching there, they spontaneously jump up and start dancing and clapping, they can’t keep it to themselves,” Father Vladimir explains. “They live with death and sickness as a part of daily life, and when they hear about Christ, they are so joyful, so grateful. ‘He is our only hope!’ they exclaim. They are so dedicated to the Faith. Oftentimes their catechists teach the Faith as a fulltime job, giving up their regular employment so they can go village to village to teach and help. Most villages can’t have liturgies because there aren’t enough priests, but they do Orthros by heart.”

He continues, “it’s impossible for them to come to communion quietly. They dance on the way up, and they dance when they go back to their places. After church, they dance and sing for another hour or hour and half—then they walk home through the desert.”

Fr. Martin Ritsi baptises child in Loudwala, 2011.Father notes that the churches in Kenya aren’t simply buildings people go to on Sunday, but are seen as houses of refuge seven days a week. Children come to get fed and go to school there, people receive medical aid, and truth is preached. “The Church helps all of their lives—there no separation of the spiritual life and physical life,” he explains.

A connection has been established between the parishes of Connecticut and the Turkana people. “As an OCA priest,” says Father Vladimir, “I was so happy that in our diocese and deanery there has been an outpouring of gifts. OCA seminarians came with us during the last trip; we put the word out in our deanery of the needs of the churches there, and people contributed liturgical items and other things to assist them. Our support and love means so much to them.” Father notes that the youth of his parish have become involved in various ways as well. “Every time we move out on a mission team, it impacts us here, both young people and the adults,” he says. “The Turkana have so much to teach us.”

The Kenya ministry has also brought all the jurisdictions together in Connecticut as a uniting force. “This has been the most successful Connecticut pan-Orthodox outreach we’ve had,” notes Father Vladimir. “When we are on a team and working together there, or raising funds here for the people of Turkana, we are simply the Church, with no jurisdictional differences. There is a tremendous sense of our oneness in living out the Great Commission.” The Fellowship of Orthodox Churches of Connecticut has raised $11,000 to put in a well in Loupwala.

This summer, Father Vladimir and Matushka Suzanne will return to the Turkana people, to minister alongside Father Vladimir Paul and his community. “We are coming full circle this year, since we will go back to Lodwar to consecrate the parish of Saint John the Baptist.” The church also has a school now, serving over 150 students. A school building is under construction, and the community is distributing two meals a day to the children.

Father Vladimir concludes, “We who are OCA missionaries are a part of something so much bigger than ourselves—we are all connected.”