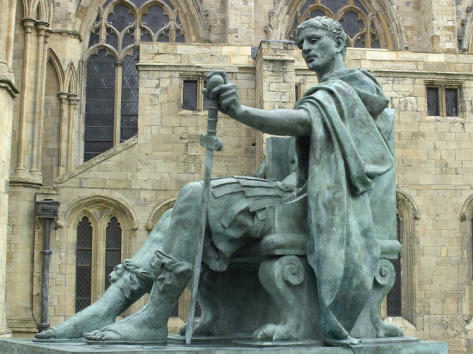 STATUE OF CONSTANTINE THE GREAT IN YORK, ENGLAND, WHERE HE WAS PROCLAIMED ROMAN EMPEROR IN 306

2013 marks the 1700th anniversary of the Edict of Milan, when emperor Constantine ended the persecution of Christianity, to which he had converted. In early October, World Council of Churches General Secretary Dr Olav Fykse Tveit praised Constantine’s legacy in glowing terms. Yet in reality it has been a mixture of harm and good.

Tveit sent his regrets to Serbian church leaders for being unable to attend anniversary ceremonies to which they had invited him, stating that the legacy of Constantine – the first ruler to do battle and kill in Christ’s name – “is still helping to determine the Church-state relationships in Europe and elsewhere.”

Supposedly “The main features of Constantine the Great`s legacy are religious freedom, peace and harmony between people and nations, a fruitful collaboration between church and state for the good of the entire society, tolerance, love and peace within humankind. All these and many others are values inspired by the gospel of our Lord Jesus Christ and by our common humanity through which we, as Christians, are called to promote and stand for the other and the neighbour.”

The message claimed that all Christians “recognise and value his legacy. The Orthodox tradition honours Emperor Constantine as a Saint while Western Christianity appreciates his courage in granting freedom to a small and often persecuted minority, the Christians in his time, and we recognise his pioneering and prophetic role in improving Roman society.”

In reality, while aspects of his rule were positive, turning Christianity from a persecuted minority faith to a dominant religion aligned with, and serving the interests of, the state and ruling class has hardly been an unmixed blessing. Indeed there have always been sections of the church which sought a different path, closer to that of Jesus. Today one of the greatest challenges for mission is persuading non-believers that violent power-seeking is not at the core of our faith.

It is understandable that the WCC General Secretary should wish to be diplomatic in responding to denominational leaders’ invitations. Yet, while tact is sometimes called for, church politics should not trump truthfulness about the shadow side of the church’s past. Without honesty and penitence, the door to forgiveness and healing is closed, and the chances of further offending are multiplied.

Indeed recent celebrations of Constantine have been beset by politics. While the Edict of Milan did affirm religious freedom, there is some evidence that the emperor went on to remove certain rights from Jewish and possibly pagan worshippers, though debate continues about the extent to which he laid the foundation for later persecution of non-Christians and ‘heretics’ as well as ‘holy wars’. Certainly he was not above intervening in internal disputes that divided Christians and punishing those who disagreed with the views to which he gave his backing.

In 2012, Vatican celebrations of the 1700th anniversary of Constantine’s conversion gave rise to disagreement between a professor who insisted that the emperor had nothing to do with anti-Jewish persecution and the chief rabbi of Rome, Riccardo Di Segni. The conversion of Constantine “has had a decisive impact on history, and is closely related to the persecution of the Jews,” he told Vatican Insider. It “has divided history into ‘before’ and ‘after,’ causing such turmoil that Emperor Julian’s unsuccessful attempt to remedy it earned him the title of ‘the Apostate.’ It goes against all historical evidence to deny it.”

But at the celebrations in Serbia in October 2013, despite the grim legacy of Serbian nationalism which exploited ‘Christian’ sentiment to legitimise cruelty, Eastern Orthodox patriarch Bartholomew I emphasised Christians’ role as victims – never perpetrators – of religious intolerance. “They cherish everyone and are persecuted by all,” he declared.

Russian Orthodox patriarch Kirill I, widely criticised for being too close to authoritarian president Vladimir Putin, joined in the festivities, emphasising the “Christian source of European civilisation”.

Welcoming Kirill, Serbian Orthodox patriarch Irinei (or Irinej) reportedly voiced his joy that “we have similar roots, the same Slavic blood flows in us, we share the same faith”.

In a Europe where ethnic nationalism and far-right extremism are on the rise, perhaps ecumenical organisations and networks should be bolder in promoting debate on difficult issues affecting justice and peace.

(c) Savitri Hensman is a regular Christian commentator on politics, economics, society, welfare and religion. She is an Ekklesia associate and works in the equality and care sector.