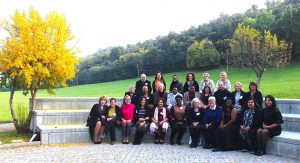 A consultation with the theme ‘Ecumenical Perspective on the Role of Women in the Churches’ brought together 28 women and men to the Monastero di Bose in northern Italy from 3-7 October 2017.

The event was jointly organised by World Council of Churches (WCC) Just Community of Women and Men programme and the WCC Commission on Faith and Order as a follow-up to a similar consultation in 1979 which led, in 1980, to the publication of the book “Ordination of Women in Ecumenical perspective: a Workbook for the Church’s Future.”

Participants shared reports from their churches and regional contexts identifying continuities and important new developments. They hinged their dialogue on key questions such as: “What have been the effects of the (non) ordination of women for the ecumenical movement? What fresh challenges do we see in a context vastly different from the 1980s?”

* More about the Just Community of Women and Men programme here

* The World Council of Churches promotes Christian unity in faith, witness and service for a just and peaceful world. An ecumenical fellowship of churches founded in 1948, by the end of 2012 the WCC had 345 member churches representing more than 500 million Christians from Protestant, Orthodox, Anglican and other traditions in over 110 countries. The WCC works cooperatively with the Roman Catholic Church.