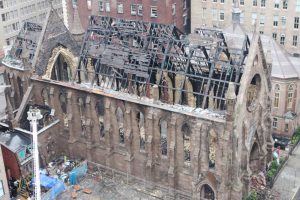 By Isabel Vincent and Chris Perez

The historic Manhattan cathedral that was gutted in a massive fire was one of four Christian Orthodox churches to go up in flames on Orthodox Easter Sunday — sparking fears of a coordinated attack on the religion.

While FDNY officials said the blaze at the Serbian Orthodox Cathedral of St. Sava on West 25th Street does not appear suspicious, members of the Orthodox community have doubts.

They are worried that the blaze — along with church fires in Australia and Russia — were set in retaliation for the religion’s role in blocking the canonization of Croatian Nazi supporter Cardinal Aloysius Stepinac — whose potential sainthood has created a rift between Serbia and Croatia, with the leaders of each lobbying Pope Francis.

Croatian Prime Minister Tihomir Oreskovic discussed the issue in a visit to the Vatican in early April, while Serbian President Tomislav Nikolic made his case last September.

“Too many churches have burned to call it an accident,” said Dr. Dušan T. Bataković, a former Serbian ambassador who is now director of the Institute for Balkan Studies in Belgrade.

“It is very strange that it happened, that the fires all took place on Easter, the greatest Christian Orthodox holiday,” he said. “Some kind of terrorist action cannot be excluded.”

In addition to the fire that engulfed St. Sava, churches in Sydney and Melbourne, Australia, and in northern Russia were all engulfed in flames just hours after Easter services.

“Within the last six months, the Serbian church was urging Pope Francis not to canonize into a saint Cardinal Stepinac, for his complicity in the large-scale massacres and genocide against the Serbs, Jews and Roma [Gypsies],” Bataković said.

“Despite protests from the Croatian church, the pope postponed the decision of making Stepinac a saint, and there is a lot of anger, because he is considered as one of the key church members in the Croatian history.”

In a letter to Francis, Serbian Orthodox Patriarch Irinej said, “We are afraid that there are too many open questions and wounds which Cardinal Stepinac symbolizes.

“His canonization, to our great regret, would return the relations between Serbs and Croats, as well as between Catholics and Orthodox faithful, back to their tragic history.”

Barry Lituchy, executive director of the Jasenovac Research Institute, a Brooklyn-based human-rights nonprofit, told The Post he has been bombarded with calls from worried Orthodox community members.

“This is a terrible tragedy, and the thought that this is an attack has not escaped us,” he said. “This deeply affects everyone in the Serbian community.”

In Sydney, fire reduced the Macedonian Orthodox Church of the Resurrection to rubble, rending the 126-year-old sanctuary in two, the Sydney Morning Herald reported.

In Melbourne, the 115-year-old Holy Church of Annunciation of Our Lady, a Greek Orthodox church, was heavily damaged by a fire that was contained to the roof, authorities said.

In Russia, some 70 parishioners were evacuated from the historic Valaam Monastery in Lake Ladoga after it caught fire during their Easter celebration.

Lituchy said investigators need to take a close look at recent Catholic-Orthodox relations when trying to determine what may have caused the fires in Australia and Russia.

He added that during the Yugoslav wars of the 1990s — when the Serbs fought the Croatians in the former Yugoslavia — threats were made against the Cathedral of St. Sava.

The church also had deep financial troubles and is battling a major Manhattan developer over a $100 million project that fell through two years ago.

St. Sava had seemingly found an angel to rescue its congregation and crumbling 1850 landmark building from financial ruin in May 2014, when it struck a deal with Madison Equities.

Under its terms, the firm would get a $100 million, 99-year lease to build a commercial building on an adjacent lot in exchange for paying rent and $250,000 to repair the church.

But the developer found that it would have to pay an “exorbitant” $13.5 million real estate broker’s fee — six times the market rate — to a third party called TenantWise to ink the deal, court papers show.

Madison Equities sued to void the deal and sought $500,000 to recoup the repair payment and other costs.

A judge tossed the developer’s case in January, finding the firm was aware of TenantWise’s involvement in the leasing of the church’s land. The developer is appealing.