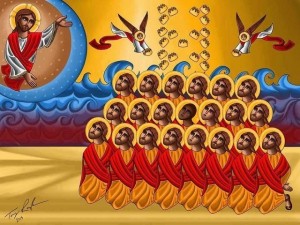 The Coptic Orthodox Church has announced that the 21 Egyptian Christians murdered by the Islamic State in Libya will be commemorated in its Church calendar as martyrs and saints.

Coptic Orthodox Pope Tawadros II said that the names of the 21 martyrs beheaded by ISIS on February 14 will be inserted into the Coptic Synaxarium, the Oriental Church’s official list of Martyrs, a procedure similar to canonization in the Latin Church.

An icon of the 21 martyrs, drawn by Tony Rezk, will be the official image to commemorate their supreme witness (accompanying photo).

The Islamic State terror group released a video on February 15 showing the brutal beheading of 21 Egyptian Christians who had previously been kidnapped in Libya. The Egyptian Christians were lined up along a beach and abruptly beheaded in the graphic five-minute video. The Islamic State’s Al Hayat Media produced the Libya video titled, “A Message Signed with Blood to the Nation of the Cross.”

Pope Francis denounced the murders and called the Christians “martyrs” who were “killed simply because they were Christians.” The Pope also remarked that their last words were: “Jesus, help me!”

“The blood of our Christian brothers and sisters is a witness that cries out to be heard,” the Pope said.

“It makes no difference whether they be Catholics, Orthodox, Copts or Protestants,” the Pope continued. “They are Christians! Their blood is one and the same. Their blood confesses Christ.”

The recent murders in Libya have driven home to Europeans the proximity of the Islamic State to Europe, moving them to high alert and the mobilization of security forces. At the same time, the heroic witness of those who died has also strengthened the faith of many.

Beshir Kamel, brother of two of the Coptic martyrs, said that he was proud of his brothers Bishoy and Samuel, and said that their martyrdom was “a badge of honor to Christianity.”

Kamel went so far as to thank the Islamic State for including their Christian witness in the videos before beheading them.

“ISIS gave us more than we asked when they didn’t edit out the part where they declared their faith and called upon Jesus Christ. ISIS helped us strengthen our faith,” he said.

Kamel said these words in an interview with SAT 7-ARABIC. The interview went viral, receiving over 100,000 views within hours of its release.

The interviewer asked Kamel what his reaction would be if he were to encounter an Islamic State militant, to which Kamel recalled his mother’s response: “My mother, an uneducated woman in her sixties, said she would ask [him]to enter her house and ask God to open his eyes because he was the reason her son entered the kingdom of heaven,” Kamel said.