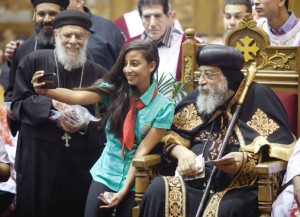 A young copt takes a selfie with Pope Tawadros II of the Coptic Orthodox Church, left, as he was at St Marc’s Coptic Church in Montreal, Saturday, Sept. 20, 2014.
Photograph by: Vincenzo D’Alto , The Gazette

OTTAWA, Sept. 23, 2014 /CNW/ – The 118th Pope of the Coptic Orthodox Church will visit three congregations inOttawa and Kingston, as well as Canada’s first Coptic monastery in Perth, ON

The Coptic Orthodox communities in Ottawa and Kingston celebrate the first official visit to their respective cities by His Holiness, Pope Tawadros II, Patriarch of All Africa on the Holy Apostolic See of St. Mark the Evangelist of the Coptic Orthodox Church of Alexandria.

Jason Kenney, Minister of Employment and Social Development greeted His Holiness, upon his arrival at Pearson International Airport in Toronto on September 5, and welcomed His Holiness on behalf of Prime Minister Stephen Harper.

In his month-long visit to Canada, his first since being enthroned in November 2012, His Holiness will visit 52 Coptic churches in Canadian cities from coast to coast, including (but not limited to) Toronto, Ottawa, Montreal, Winnipeg,Edmonton, and Vancouver.

His Holiness will pray the Holy Liturgy in Ottawa’s two parishes, the church of St. Mary and the church of St. Georgeand St. Anthony, as well as in Kingston, where he will be giving a lecture at Queen’s University. He will also attend a banquet ceremony hosted by the local Ottawa communities to celebrate this historic visit.

In addition, His Holiness will be blessing St. Anthony Coptic Orthodox Monastery, Canada’s first Coptic monastery, situated near Perth, ON, where he will be putting the cornerstone for the monk’s cell.

H.H. Pope Tawadros II was enthroned to the see of Saint Mark on November 19, 2012 at St. Mark’s Cathedral in Abbasiya, Cairo.  His Holiness was born on November 4, 1952.  He received a bachelor’s degree in 1975 from the Faculty of Pharmacy at Alexandria University.  He attended the Coptic Seminary and graduated in 1983.  In 1985, he earned a fellowship with the World Health Organization from the British International Health Institute in England.

He managed a state-owned pharmaceutical manufacturing operation after graduating, and later joined the Monastery of Saint Pishoy in Wadi Natrun to study Theology for two years.  He was ordained into the priesthood in 1989, and was consecrated as a general bishop on June 15, 1997, by the late Pope Shenouda III.

The name “Tawadros” is the Coptic version of the Greek “Theodoros”, the English “Theodore”, and the Arabic “Tadros”, all of which mean “Gift of God”.

The Copts are the native Christians of Egypt. The Coptic Church was founded in 42 AD by Saint Mark the Apostle, shortly after the Ascension of Our Lord Jesus Christ.  Saint Mark is the author of the earliest of the four Christian Gospels, and is the first Patriarch (Pope) of the Coptic Church.  The Coptic Church has been blessed with outstanding leaders throughout the ages.

The Church has been blessed with a succession of Patriarchs, starting with Saint Mark (1st Pope) to our current beloved Pope, H.H. Pope Tawadros II (118th Pope).