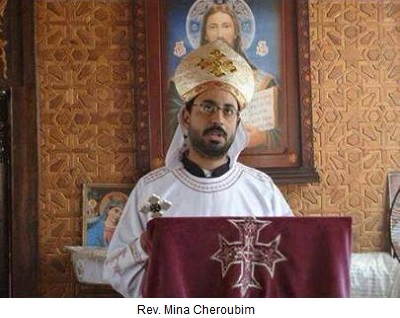 (AINA) – This morning masked men gunned down Father Mina Cheroubim, pastor of the Coptic Orthodox church, as he left his church building in el-Arish North Sinai, 344 kilometers northeast of Cairo. Yesterday Muslims attacked Coptic inhabitants in the village of Nag Hassan, Dabayaa, in Luxor province. This attack was prompted by news that allegedly four Copts killed 45-year-old Muslim H. Hefny, whose body was found near the river. The attack killed four and wounded three. 16 homes and shops were torched, including the home of a Coptic family who are accused of being involved in the killing of the Muslim man. Police and ambulances were sent to the village as hundreds of scared Coptic inhabitants left the village. One of the villagers said that the dead Muslim was not killed by Copts but by Muslims in order to cause sedition and force Christians to leave the village.

Muslims have continued terrorizing Christians. On July 3rd, in the village of Delga in Deir Mawas, Minya Province, which has a population over 65,000, the services building of the Coptic Catholic Church of St. Georges was looted and torched, and the El-Saleh Church in Delga was heavily fired at. The villagers had their homes and businesses looted and torched. Most of the Copts, the majority in Delga, left their homes in fear. Two Christians were wounded from the fires.

Rev. Ayub Saleh, pastor of Delga Catholic Church, who was smuggled out across rooftops by the neighbors, said that supporters of former President Morsy are engaged in continuous and unprecedented harassment of Copts. He said that a number of those people broke into the homes of Christians at gunpoint, terrorizing women, children and seizing gold jewelry and furniture. He contacted security forces, pleading for help. Witnesses said security arrived next morning.

“Every Coptic home they loot, they torch afterwards — Muslim homes are spared,” said a village Copt to activist Mariam Ragy in an aired interview. “Most Copts are outside of the village, not knowing whether their homes are still there or looted and torched.” He said that Muslims walk normally in the streets, they just go to Christian homes and take what they want.” He said the situation and persecution of the Copts is still the same, before and after the 30th June Revolution, as it is now dubbed.