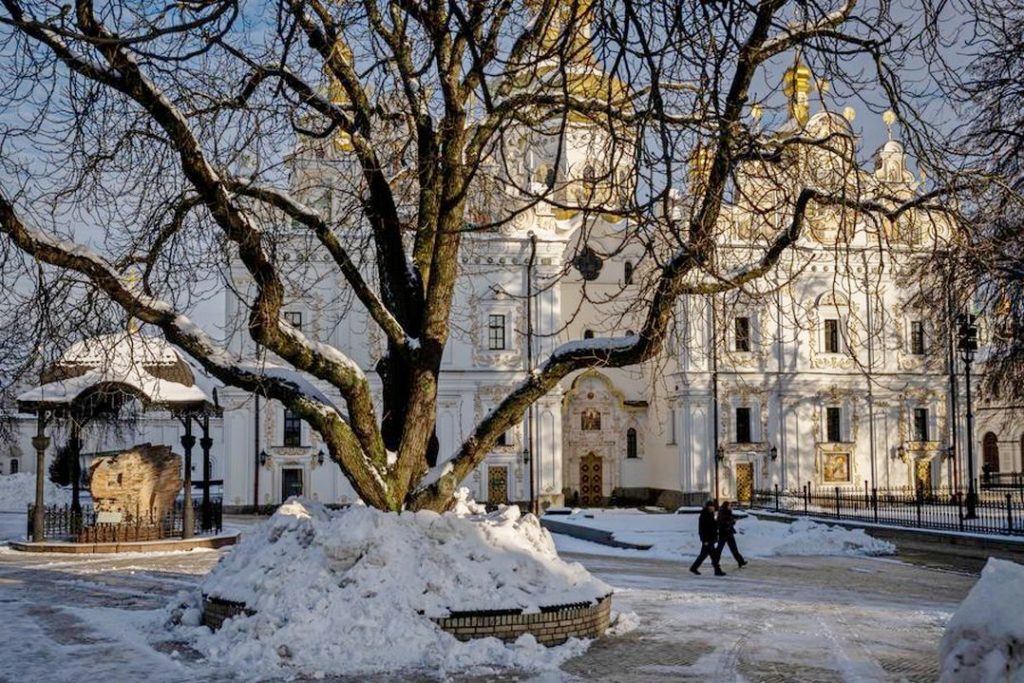 The Kyiv-Pechersk Lavra complex in Kyiv. The Ukrainian Orthodox Church is canonically linked to the Moscow Patriarchate. BERNAT ARMANGUE/ASSOCIATED PRESS

KYIV, Ukraine—Ukraine’s government moved to curb the activities of the Orthodox Christian denomination historically linked to Moscow, aiming to cut off the most important remaining source of Russian cultural and religious influence in the country.

President Volodymyr Zelensky announced the move as deadly battles continued along the front line, with Russia making small advances near the eastern Ukrainian city of Bakhmut, which has re-emerged as a major focus of the war.

The Ukrainian Orthodox Church, canonically linked to the Moscow Patriarchate, is one of the country’s two main Orthodox denominations and used to be the dominant one before many faithful and parishes switched to the rival Orthodox Church of Ukraine.

Viewed by Moscow as heretical, the OCU was recognized in 2019 by the Ecumenical Patriarchate of Constantinople as fully independent from Russia, a major diplomatic achievement for Kyiv and a blow to Russian soft power. Most Ukrainian believers are Orthodox Christians, though Greek Catholics are predominant in the country’s west.

A member of the Security Service of Ukraine at the entrance of the Kyiv-Pechersk Lavra last month.PHOTO: SERGEI CHUZAVKOV/AGENCE FRANCE-PRESSE/GETTY IMAGES

Mr. Zelensky’s crackdown on the UOC follows a series of raids by the Security Service of Ukraine. The intelligence agency has said it has found evidence of UOC priests possessing Russian citizenship, contacting Russian intelligence agents and owning literature denying the right of Ukraine to exist. One of these raids was triggered by a video filmed in the Kyiv-Pechersk Lavra cathedral, the seat of the UOC and one of the holiest Orthodox shrines, in which the faithful sang a hymn celebrating Russia’s “awakening.”

“We will ensure complete independence for our state. In particular, spiritual independence,” Mr. Zelensky said in his late-night address Thursday, after the country’s national-security council approved new steps against the UOC. “We will never allow anyone to build an empire inside the Ukrainian soul.”

The national-security council, Mr. Zelensky said, has decided that the government would submit to parliament a draft law “making it impossible for religious organizations affiliated with centers of influence in the Russian Federation to operate in Ukraine.” The government has also decided to examine the UOC’s canonical connection to Moscow and the grounds for its control of the Kyiv-Pechersk Lavra, and to apply sanctions to UOC priests linked to Russian intelligence services.

Dmitry Medvedev, deputy chairman of the Russian Security Council, responded on his Telegram channel: “The current Ukrainian authorities have openly become enemies of Christ and the Orthodox faith.”

President Vladimir Putin’s spokesman, Dmitry Peskov, said last month that Ukraine was “waging war against the Russian Orthodox Church.” Mr. Putin has repeatedly said that Ukrainians and Russians are one people, and should belong to a “common whole.”

The State Department said Friday it is following developments. “We understand that President Zelensky stressed the principles of religious freedom in his decree today, and we expect that any actions will be fully consistent with international law protecting freedom of religion or belief,” a State Department spokeswoman said.

The UOC found itself in a precarious situation after its spiritual head, the Moscow and All-Rus Patriarch Kirill, enthusiastically endorsed Mr. Putin’s Feb. 24 invasion and ordered all believers to pray for a quick Russian military victory. Russia, Ukraine and Belarus all belonged to the ancient Kyiv Rus, established in the ninth century, and the term Rus refers to all of these eastern Slavic lands.

The head of the UOC, Metropolitan Onufriy, ordered UOC priests after the invasion to drop prayers for Patriarch Kirill’s well-being from their liturgy and said the church was no longer organizationally subordinated to the Moscow Patriarchate even though it retained a canonical religious connection. He also issued statements supporting the Ukrainian army in its fight against the Russian invasion, and labeled the war as “a repetition of Cain’s sin.”

Still, a large number of UOC priests, particularly in Russian-occupied territories, have been collaborating with Russian security services, according to the Security Service of Ukraine, or SBU. On Friday, SBU investigators raided several UOC monasteries and churches in the Rivne, Zhytomyr and Transcarpathia regions, looking for more evidence of links to Moscow and aiming to “make it impossible for religious communities to be used as centers of the ‘Russian world.’”

Last month, the legislature of the Vinnytsia region in central Ukraine voted to ban the UOC, saying that the church “ideologically validates and supports the war, and justifies the war crimes that Russia commits on Ukrainian territory.”

That decision violated constitutional guarantees of the freedom of religion, the UOC Metropolitan of Vinnytsia and Bar, Varsonofiy, said at the time, adding that neither the Ukrainian president nor parliament had the authority to ban the UOC without a go-ahead from the courts. “It’s the time to unite the society and not to divide it. The priests and the faithful of the Ukrainian Orthodox Church care for Ukraine’s statehood as much as other citizens, and are no doubt its patriots,” he said.

The UOC of the Moscow Patriarchate was the only recognized church in Ukraine during Soviet times, with many of its priests working as KGB officers, while the independent Ukrainian Orthodox and Greek-Catholic churches were illegal. This legacy means that most of the historic Christian churches and cathedrals in Ukraine remain controlled by the UOC. The most important of them is the Kyiv-Pechersk Lavra, whose ownership Mr. Zelensky’s decision contests.

Established in the 11th century as the monastery of the caves on a cliff overlooking the Dnipro river, the Lavra holds the relics of some of the most important Orthodox saints venerated in both countries, as well as the tombs of key Russian political figures such as former prime minister Pyotr Stolypin, who was assassinated in the Kyiv opera theater in 1911.

The conflict over Russia’s spiritual influence in Ukraine escalated after a series of Russian battlefield defeats, including the withdrawal from the southern city of Kherson last month, and Russian missile strikes that have severely damaged the Ukrainian electricity network and plunged millions of households into darkness. Both Russia and Ukraine have moved troops freed up after the Kherson operation to the eastern Donetsk region, where regular Russian formations and the Wagner private military company are trying to seize the strategic town of Bakhmut.

Russian forces have been able to seize a few small villages on the outskirts of Bakhmut in recent days, but so far they remain outside the city.

President Biden on Thursday said he was open to meeting with Mr. Putin, but only if the Russian president demonstrates that he is willing to bring the invasion of Ukraine to a close.

“I have no immediate plans to contact Mr. Putin,” Mr. Biden said after a meeting with French President Emmanuel Macron in Washington. “I’m prepared to speak with Mr. Putin if, in fact, there is an interest in him in deciding he’s looking for a way to end the war. He hasn’t done that yet.”

German Chancellor Olaf Scholz called Mr. Putin on Friday, according to a Kremlin readout of the call. The Russian president berated Mr. Scholz for “the destructive approach of Western states, including Germany, that are pumping the Kyiv regime with weapons,” thereby allowing Ukraine to reject the idea of peace talks. Mr. Putin also defended Russian strikes on Ukraine’s energy infrastructure as a “forced and inevitable response” to Ukrainian attacks, according to the Kremlin.

Ukraine has said that it is ready for talks with Moscow once Russia leaves illegally occupied Ukrainian territory. Russia in October passed legislation claiming four Ukrainian regions, none of which it controls in their entirety, as sovereign Russian territory and says that the war is now being waged to “liberate” the Russian lands it considers to be occupied by Kyiv.

Separately, Ukraine’s Foreign Ministry said Friday that several of its embassies had been sent bloody packages, days after country’s Madrid Embassy received a rudimentary bomb sent through the mail.

The ministry said the embassies in Hungary, the Netherlands, Poland, Croatia, Italy and Austria, as well as two consulates general and a consulate in the region had received packages containing animal eyes.

“We have reasons to believe that a well-planned campaign of terror and intimidation against Ukrainian embassies and consulates is taking place,” said Foreign Minister Dmytro Kuleba.