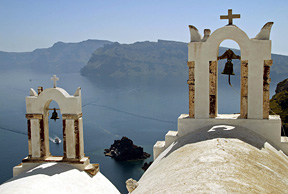 “Cremation is a practice not accepted by the Orthodox Church and teachings,” Haris Konidaris, spokesman for Archbishop Ieronymos of Greece and the Church told SETimes. [AFP]

The Greek Orthodox Church refuses to allow the practice, but analysts said the church should be more compassionate.

By Andy Dabilis for Southeast European Times in Athens

The refusal of the Greek Orthodox Church to allow cremation has sparked a debate in the country.

With urban cemeteries filling so fast that bodies are dug up after three years and put in ossuaries so plots can be reused, Greece gave approval for cremation in 2006. Although Athens gave licensing authority to local governments, no one has been able to get past opposition from the powerful church.

“Cremation is a practice not accepted by the Orthodox Church and teachings,” Haris Konidaris, spokesman for Archbishop Ieronymos of Greece and the Church told SETimes. “It’s not a question of dogma. We recognise only burial for the protection of the body. Cremation would be violence [against the body],” he added.

“This should be handled by the church in a more compassionate way … the Greek Orthodox Church has to take seriously into account the will of the believer for disposal after death,” Emanuel Perselis, a professor of theology at the University of Athens told SETimes.

When Platon Tinios’ 86-year-old mother died in Greece last year, he had to go to Bulgaria to fulfill her last wish to be cremated.

Tinios, an economics professor and one-time prime ministry advisor, took it in stride. “She liked trips, so we took her to Sofia,” he told SETimes, smiling at the idea. “She was cremated there and she came back in an urn.”

Two to three bodies are transported for cremation daily to Bulgaria, Germany, France, Italy, Poland and the UK, at costs ranging from 2,500-6,000 euros, said Antonis Alakiotis, head of the Committee for the Right of Cremation in Greece. The committee unites Catholics, Hindus and other religions representatives.

If cremation was allowed domestically, the cost would be about 2,000 euros, compared to traditional funerals which typically cost a minimum of 3,000 euros.

“The reasons we don’t have a crematorium is that it has to be in a cemetery or next to it and most of the cemeteries don’t have the space … but also because the power of the church is so strong that no one wants to do it,” Alakiotis told SETimes.

“The church doesn’t want it because funerals and memorial services bring a lot of money,” Frosso Antoniou, 52, a language teacher told SETimes. “Cremation is more beneficial to the friends and family.”

“I don’t agree with cremation,” Panos Georgiou, a retiree told SETimes. “God said we are mud and we return to mud. Burying is God’s will.”

Ari Caratzas, a New York and Athens-based publisher who specialises in religion, told SETimes that cremation was a practice allowed in ancient Greece, but “those people who are promoting cremation are consciously promoting violating customs because of the way they see the world. They have a strange idea that somehow our culture is backwards.”

It’s been 18 months since officials in Thessaloniki, Greece’s second-largest city, voted to permit construction of a crematorium, with little progress since.

Last year, a campaign by Markopoulou Mayor Sotiris Methenitis to put a crematorium there failed when the city council overturned its unanimous verdict in favour of the project after a strong lobbying campaign by church officials.

“I thought that allowing the crematorium to be built, the first one in Greece, would bring to this small community an air of modernisation,” Methenitis said.

Proponents of cremation have found the church a formidable opponent in a country where as many as 96 percent of people say they are Greek Orthodox.

Priests will refuse to perform funeral services for anyone who wants to be cremated and so intense are the feelings against it by opponents that they booed proponents and scientists out of the Markopoulou City Hall.

“No theological view should affect or interfere with a person’s right to do whatever he or she wishes with their remains,” Methenitis said.
[subscribe2]