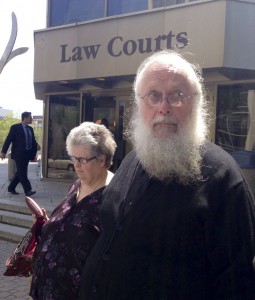 A former high-ranking Orthodox archbishop should serve a year in jail for violating his position of trust and sexually molesting an altar boy in Winnipeg in the 1980s, prosecutors say.

That’s was the Crown’s position as Seraphim (Kenneth) Storheim, 68, appeared for sentencing in the Court of Queen’s Bench Wednesday.

“The hallmarks of this case are the abuse of trust, the abuse of a child and the historical nature,” Crown attorney Breta Passler told Justice Christopher Mainella.

The Crown is seeking the term of real jail in hopes of sending a firm message to the general public any child-sexual-abuse cases will be seriously punished.

That’s even when the allegations date back decades and the perpetrator is of otherwise good conduct.

Passler opposed Storheim being allowed a conditional sentence. This would allow him to skirt jail and remain in the community under house arrest.

Storheim has no criminal record and over the past 42 years had risen to the top of religious ranks to become an archbishop of the Orthodox Church in America.

The church has 700 parishes, missions and other institutions across North America.

Storheim was suspended after being charged and turning himself in in November 2010.

He retired to private life after Mainella convicted him earlier this year, court heard.

Storheim was the parish priest at Holy Trinity Sobor Orthodox Church on Manitoba Avenue at the time of the 1985 incident.

He had befriended the victim’s family while serving at another parish outside Manitoba. The victim was visiting Storheim in Winnipeg at the time.

The sexual assault of which he was convicted involved a single incident of inappropriate touching.

Defence lawyer Jeff Gindin described the assault as “the briefest of touches.”

“It’s very hard to do less and still have it be a sexual assault,” Gindin said.

Dozens of letters of support were presented to the court speaking to Storheim’s good character.

“I simply urge the court to spare putting Mr. Storheim behind bars,” he said. “Essentially he’s lost everything.

“His reputation is in tatters.”

Mainella will issue a decision on July 9.

Republished from the Winnipeg Free Press print edition June 19, 2014 A12