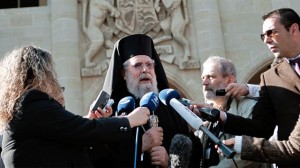 Cypriot Archbishop Chrysostomos II speaks to the media outside the Presidential Palace after his meeting with Cypriot president Nicos Anastasiades, in Nicosia, March 20, 2013. / AP

[NICOSIA, CYPRUS] The head of Cyprus’ influential Orthodox church, Archbishop Chrysostomos II, says he will put the church’s assets at the country’s disposal to help pull it out of a financial crisis, after lawmakers rejected a plan to seize up to 10 percent of people’s bank deposits to secure an international bailout.

Speaking after meeting President Nicos Anastasiades Wednesday, Chrysostomos said the church was willing to mortgage its assets to invest in government bonds.

The church has considerable wealth, including property, stakes in a bank and a brewery. Tuesday’s rejection of the deposit tax has left the future of the country’s international bailout in question.

Lawmakers rejected a bill on Tuesday that would have allowed government access to people’s bank accounts. Though an amendment was made before the vote Tuesday morning that would shield small deposit holders from the deposit tax, the bill was still voted down 39 to 19.

The bill aimed to target foreigners who had taken advantage of Cyprus’ low tax regime. However, opponents to the bill argue that a blanket charge will hurt Cypriots more.

Cyprus needs 15.8 billion Euros to bail out its banks and shore up government finances to avoid default and a potential exit from the European joint currency. It wasn’t immediately clear what the total value of the Orthodox Church’s assets would be, or how much of that value the church was actually willing to lend the government.