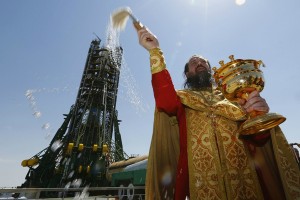 A Russian Orthodox priest conducted a ceremony in front of a Soyuz rocket at the Baikonur Cosmodrome in Kazakhstan in December 2015.
Shamil Zhumatov/Reuters

The Russian Orthodox Church sees itself as the spiritual generator of public policy and the ideological bulwark of the state. Under Putin, priests have become fixtures in the military, schools, and other public institutions.

MOSCOW — Baikonur Cosmodrome may lie in Kazakhstan, but it is an iconic symbol of modern Russia: the coming together of cutting-edge science and Space Age power.

But just before the mid-December blastoff of the latest Soyuz mission to the International Space Station, the countdown procedure was halted to allow a robed and bearded Russian Orthodox priest a few minutes to shuffle around the mighty rocket, sprinkling holy water on its fuselage, murmuring snatches of biblical verse, and calling upon God to keep it safe. He also blessed each of the three astronauts – American, Russian, and British – about to make the journey.

Such is the new normal in today’s Russia. The 1993 Constitution strictly defines Russia as a secular state, in which no religion is the official or obligatory one. But many people in post-Soviet Russia yearn for ideological certainties to fill the void left by communism. And with the ascent of Vladimir Putin and Russia’s new order, the Russian Orthodox Church, an ancient institution that was nearly annihilated during seven decades of Soviet rule, is returning to a highly visible and central role in the life of the country.

Furthermore, the line between sacred and secular appears increasingly blurred in Russia. Unlike in the West, where religion and politics occupy separate spheres, the Orthodox Church sees itself as the spiritual generator of public policy and the ideological bulwark of the state. Priests have become regular fixtures in the Army, schools, hospitals, and other public institutions. When President Putin gave his recent state-of-the-nation address to parliament, Patriarch Kirill – the Orthodox equivalent of the pope – was seated prominently among top government officials in the audience.

That has prompted leaders to supplement their dubious democratic legitimacy with backing from the church that’s been a key pillar of Russian statehood for 1,000 years.

“The main idea our temporal authorities are offering these days is a return to Russian ‘great power’ status,” says Nikolai Svanidze, a historian and leading TV personality. “What the church brings to that is historical depth, clear philosophical outlook, and cultural traditions that most Russians relate to.

“But it’s a hopelessly archaic institution, profoundly reactionary, and with a long habit of subordinating itself to the state,” he adds. “It’s incapable of taking any kind of progressive stand in favor of the country’s development, and together with our current authorities it is driving Russia down the blind alley of the past.”

About 70 percent of Russians identify themselves as “Orthodox” – though only a small fraction go to church regularly – and polls show the church is one of the most highly respected institutions in the country.

But clerical support for the authorities comes with a hefty price tag. Under Putin, the Kremlin has transferred back to the church about 28,000 objects once nationalized by the Soviets and worth billions of dollars, including churches, monasteries, and precious artifacts, mostly at the expense of state museums.

The church’s move into banking

There seems little doubt that the church hopes to expand its social influence by moving into areas that are considered part of the public space in most Western countries. One ambitious plan officially put forward by the church is to create an Orthodox banking system, similar to the Islamic one, which would ban usury and be based on Christian principles. The idea has reportedly been endorsed by several banks and Russia’s chamber of commerce.

“It’s not clear what the church wants to accomplish through this, whether they are seeking greater public responsibility or just acting to lower interest rates” for the population in these difficult times, says Marina Mchedlova, an expert with the official Institute of Sociology of Religion in Moscow.

More important, the church has achieved some successes at influencing public policy. When the female punk rock group Pussy Riot staged an irreverent and illicit performance in Moscow’s main cathedral, the church was among those insisting the charges be increased from simple “hooliganism,” which suggests a minor offense, to include the sentence-multiplying addition “with intent to foment religious hatred,” because the anti-clerical content offended many Orthodox believers. The church’s view won, and the three young women were given two years in labor camps.

In recent years, the church has successfully lobbied for a law banning “homosexual propaganda” and has continued to push for much tougher legislation against issues including “blasphemy,” abortion, and pornography.

“Many people think the church is only clergy, and it should not speak about secular matters, but we have overcome this Soviet legacy,” says Archpriest Vsevolod Chaplin, who was the church’s most recognizable spokesman until he was abruptly fired by the patriarch Dec. 24. “The church is millions of people, and they have every right to speak about the concerns of society, especially ethical ones like family values, corruption, education policy, abortion, and relations with power. Many priests do speak out about such things these days, and I think that’s a good thing.”

Ironically, Father Chaplin told the media that disagreements over the church’s relationship with the state played a role in his dismissal. He said that the church should speak to the Kremlin in a clear voice rather than through cozy personal relationships, and slammed the patriarch for snuffing out independent voices inside the church.

“Immoral elites are hampering the nation’s development,” he said, adding that “to prevent a revolution, we need to actively offer models of peaceful reforms,” according to the Interfax news agency.

A debate in the church on how far to go

Indeed, experts say there is considerable debate within the church itself over how far it should carry efforts to regain its czarist-era role as the main arbiter of Russian spirit and morality, and hence the chief legitimizer of the state’s policies and actions.

“The church is divided, and there is no single plan for how to project influence” outside the realm of purely religious authority, says Iosif Diskin, chair of the interreligious affairs commission of the Russian Public Chamber, a semiofficial civil society assembly. “Most agree that religion brings a moral dimension to social and political life, without which we cannot have a stronger and more united nation. But there is disagreement over methods, with some favoring direct political action, others calling for moral persuasion. There is no one position.”

But the church has created external tools to project its will into the political arena in the form of public organizations with names like Orthodox Rus, The Orthodox Brotherhoods, and the Union of Orthodox Women. There are now dozens of such groups that enjoy ongoing connections with the church but are able to operate independently.

Much of their work involves noncontroversial activities, such as charity work, religious outreach, and public support for the church. They operate scores of radio stations and several newspapers and websites; they also prepare programming for the church’s own nationwide TV network Spas (Salvation). Through such channels they keep up a running critique against what they see as a wave of blasphemy, sin, and moral degradation that’s washing over Russia.

“We don’t go in for politics, and we want the church to avoid the temptations of involvement in government and financial operations as well,” says Viktor Semyonov, head of the year-old Orthodox Rus movement, which describes its goal as the revival of Russia’s spiritual traditions based on Orthodox culture. “Our church survived 70 years of Soviet repression because of its spiritual strength. It still doesn’t get the respect it deserves because there are so many forces arrayed against it.”

But there are darker allegations that church-founded organizations may be linking up with – or at least providing religious cover for – nationalist and ultrapatriotic groups that sometimes turn violent.

The Sakharov Center in Moscow, a museum and art gallery named after the famous Soviet-era dissident, has seen its exhibitions smashed repeatedly by gangs of vandals who accuse it of sponsoring “blasphemous” art. Whenever lesbian, gay, bisexual, or transgender Russians attempt to stage a public protest, similar gangs appear to intimidate and often physically attack them as police look on.

If you compare the harsh prison sentence handed to the Pussy Riot band, whose actions were peaceful and caused no property damage, with the routinely lenient treatment of violent right-wing and pro-religious vandals by the courts, it gives a clear indication of which side the state is on, says Alexei Makarkin, deputy director of the independent Center for Political Technologies in Moscow.

“Those Pussy Riot women were treated as criminals and got two years” for dancing provocatively in a church, he says. “People who break into an exhibition and destroy works of art are charged with misdemeanors and given two days. That’s pretty indicative. No one is saying the church is behind such actions, but it does fail to condemn them.”

Leaders of church front groups do seem to evince ultraconservative views, which make them outliers even in Russia.

Vladimir Osipov, co-chair of the Union of Orthodox Brotherhoods, with 50 chapters around Russia, says his group’s purpose is “to strengthen Orthodox faith in Russia. We are struggling for purity of the Orthodox religion against evasions and heresies. We believe that monarchy is the ideal” form of government. “There are a lot of sad things going on in our society. In the West they cultivate homosexuality and other perversions,” he says. “Our people are against such things.”

Mr. Osipov even says the Orthodox Church should withdraw from the World Council of Churches, the main global forum for interreligious dialogue.

“We thought they might be enlightened by Orthodox faith, but the majority there turn out to be Protestants who introduce unacceptable ideas like same-sex marriage and women priests. We should leave,” he says.

It’s not clear how far the Kremlin is prepared to go to accommodate demands from the church and its supporters. Many leading Russian officials, including Putin, are devout believers. In addition to inviting church figures to participate in major state functions, and putting in appearances at key religious ones, Putin reportedly pays frequent, unpublicized private visits to famous churches and sites of Orthodox significance whenever he is traveling around the country.

Recently the Russian government seriously inconvenienced itself by postponing a lavish reburial of two members of the late Czar Nicholas II’s family – which was to have been attended by Putin, many top Russian figures, members of the exiled royal family, and other international dignitaries – because the church expressed doubts about the authenticity of the remains.

The church reciprocated when the Kremlin intervened militarily in Syria’s civil war recently. Chaplin went on TV to declare the Russian mission “a holy war against terrorism.”

But disagreements occasionally surface as well. Patriarch Kirill was notably absent from the grand ceremony where Putin announced the annexation of Crimea in 2014, and the church has remained largely silent about Russian involvement in Ukraine’s subsequent civil war.

Experts say that’s because the turmoil has strengthened the breakaway Ukrainian Orthodox Church in its struggle to win over millions of Ukrainian believers who still pay allegiance to the Moscow-based church.

“The patriarch disappeared from view, because he was against Russian intervention in Ukraine. Anything that erodes the authority of his church takes priority for him,” says Nikolai Petrov, a professor at Moscow’s Higher School of Economics.

“What role the church should play in our society is seen very differently from the church and the Kremlin points of view. They appear to act together when interests coincide, but there is no doubt in Putin’s mind that the church has to play a subordinate role.

“Any attempts by the church to play an equal or independent role in politics will be rebuffed,” Dr. Petrov says. “There is no doubt about who is in charge here.”