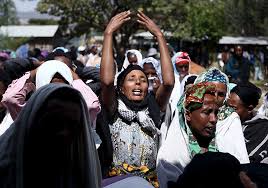 ADDIS ABABA, (CAJ News) – CHURCHES have called for restraint from protesters and state security following the killing of 100 demonstrators in Ethiopia over the last fortnight.

Reports indicate the protestors were killed in Oromia and Amhara.

Peter Prove, director of the World Council of Churches Commission of the Churches on International Affairs, mourned the lives of those who perished during these protests. He regretted the arrests and violence against protesters.

“We appeal to law enforcement officers not to resort to excessive force on unarmed civilians, and encourage protesters to look for open dialogue. We pray that all sides join hands for a better future based on social justice and human dignity.”

General manager of the Ethiopian Orthodox Church, Abune Dioskoros, urged all parties to resolve differences with dialogue and restrain from excessive force.

The Catholic Bishops of Ethiopia also called for peaceful dialogue.