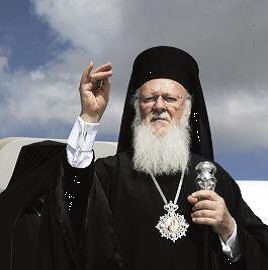 by Amb. Patrick N. Theros, Special to The National Herald

In recent weeks Russian and European websites have posted a scurrilous fabrication linking the Ecumenical Patriarchate to Fethullah Gulen, the exiled Turkish cleric and educator, accused by Turkish President Erdogan of orchestrating the failed coup. The article in question was falsely attributed to retired American Ambassador Arthur Hughes. The fabricators hacked Amb. Hughes’ email and to lend credibility created a false Facebook account in his name carrying the same story. Hughes, who is an old colleague and good personal friend, has repeatedly denied he wrote the article and has demanded that it be taken down. We have been playing whack-a-mole as the article keeps popping up on new websites. The online campaign spreading the fabricated article required technical sophistication and indicates a well-planned campaign to give it credibility.

The story has now taken a more sinister turn. A Turkish government-owned newspaper, Askam, reported the article – again attributing it to Amb. Hughes – and presented it as evidence that Gulen and Patriarch Bartholomew colluded in the failed coup attempt because Turkey had repaired its relations with Russia. Aksam argued that the improved relationship undermined Bartholomew’s struggles with Moscow.

So who did it? Three obvious suspects leap to mind. Turkish official operatives may be looking to give President Erdogan plausible cover for taking action against the patriarch. Mr. Erdogan has lately reversed his earlier benevolence towards Christians. Shutting down the Patriarchate would play to his extremist Islamist constituency intolerant of non-Muslim institutions in Muslim countries.

The operation could have originated in Russia, with its proven technical capacity and a history of provocations, which has been at odds with the Patriarch over Church jurisdictions and wishes to draw Erdogan closer into its orbit. If Erdogan acts against the Patriarch, Moscow kills two birds with one stone; it cripples Bartholomew and estranges Erdogan further from the West.

Finally, Gulen himself may have decided that entangling the patriarch strengthens his own cause. It burnishes his credentials in the West as an Islamic moderate while complicating Erdogan’s efforts to seek Gulen’s extradition from the United States.

Whether this operation originated either in Ankara or in Moscow, the threat to the patriarch remains the same. Erdogan has gone paranoid, purged Turkey of all real or imagined domestic opposition and now needs new enemies. He may see benefit from doing Moscow the favor of crippling the Patriarchate. He knows he has the whip hand over the EU (and over Greece, the Patriarchate’s only foreign patron) by threatening to unleash waves of refugees across the Aegean. He has also proven that the United States will do nothing to endanger Turkish cooperation against the Islamic State, however problematic its execution.

Paradoxically, the Patriarchate may be best served if Gulen inspired the article and even better if Erdogan believes that Gulen did so. In that case, Erdogan would probably conclude that he would play into the hands of the man he has declared Turkey’s bête noire if he moved against Patriarch Bartholomew.

If Erdogan does act against Patriarch Bartholomew he will either detain the Patriarch and block all his contacts with the outside or expel the Patriarchate as a “threat to the stability of the State.” Detaining the Patriarch would pose a real problem for Erdogan; he would provoke international protest demanding his release, something Erdogan could not do without appearing to bend to foreign pressure. Expelling the patriarch, on the other hand, would create a brief storm of criticism but like all else in our turbulent world, would soon be overtaken by other events and forgotten.

The Patriarchate must find a course of action that will deter Erdogan or, failing that, place the Patriarchate in a stronger position. Done properly, a smart plan should also make Moscow think twice. The best bet would be to take a page from history. When the Crusaders took Constantinople in 1204, the Patriarchate relocated to Nicaea, and did not return to the City until Michael VIII Paleologos expelled the Franks in 1261.

The Patriarchate should continue to publicly condemn the fabricated stories but acknowledge the threats they have raised. The Patriarchate should make it absolutely clear that if the Turkish Government expelled the patriarch, he would transfer his seat of authority to Washington DC. The access and influence conferred by the simple act of being located in the capital of the most powerful country in the World has no comparison.

In Turkey, the Patriarch must work hard to remain in the public eye. In Washington, he commands the world stage. By expelling the patriarch, Erdogan would make him far more powerful than he is today. By the same token, Patriarch Bartholomew would be even more effective at counterbalancing Moscow all over the Orthodox World. Kirill, the patriarch of Moscow, is not a fool. He would be all over Putin to prevent this from happening.

Hopefully, our concerns may be misplaced but, again, better prepare for the worst for it may be upon us sooner than we think. It is imperative that the Patriarchate considers options and alternatives and quickly decides what it must do. It could do far worse than putting the seat of the Patriarch on 16th Street.

The Hon. Ambassador Theros is president of the U.S.-Qatar Business Council. He served in the U.S. Foreign Service for 36 years, mostly in the Middle East, and was American Ambassador to Qatar from 1995 to 1998. He also directed the State Department’s Counter-Terrorism Office, and holds numerous U.S. Government decorations.