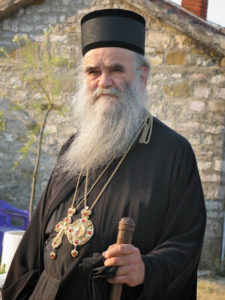 Metropolitan Amfilohije of Montenegro and the Littoral (age 82) died this morning after receiving communion.   On October 6, he had been hospitalized with the Covid virus, but had subsequently conquered the virus.  He died from pneumomediastinum (air in the space between the two lungs), caused by the earlier inflammation of his lungs and oxygen therapy.  The Serbian Church has lost a giant of a man.  The following is his official biography:  https://mitropolija.com/2020/10/30/zivotopis-mitropolita-crnogorsko-primorskog-amfilohija-1938-2020/ .  The letter of condolence from Patriarch Kirill can be read in English at https://mospat.ru/en/2020/10/30/news187619/ .  It is providential that the Metropolitan lived to see the election victory (August 30) which changed the government of Montenegro for the first time in 30 years and which assured that the new law on religion, greatly opposed by the Serbian Patriarchate, will be repealed or amended.  It is also providential that today, the same day as the death of the Metropolitan, the three coalitions which won the election have finally resolved their deadlock and were able to reconcile their differences in forming a new government.  https://www.cdm.me/politika/krivokapic-potvrden-dogovor-o-ekspertskoj-vladi-narednih-dana-sopsticu-imena-kandidata-za-ministre/   Even President Milo Đukanović of Montnegro, whom the Metropolitan had strongly opposed in recent years, acknowledged today that history will appreciate the Metropolitan’s work. https://www.cdm.me/politika/dukanovic-ukupnu-djelatnost-mitropolita-amfilohija-u-crnoj-gori-cijenice-istorija/  Catholics may be interested in knowing that the Metropolitan obtained his master’s degree from the Pontifical Oriental Institute in Rome in 1965.  With all of you, I join in praying – May His Memory be Eternal.

In Cyprus, the Orthodox Church of Cyprus released on October 29 a photocopy of the four-page letter from Archbishop Chrysostomos of Cyprus to Ecumenical Patriarch Bartholomew relating to the commemoration of the OCU primate, Metropolitan Epifany, by the Archbishop.  https://churchofcyprus.org.cy/65925  For those of you who are Greek-speakers, the entire text of the letter can be easily read.  For those of us who are not, computer translation tools sadly do not work on the photocopy.  Although I have searched, I have not yet found the text on the Internet in a form that can be translated by a translation tool.  Brief summaries of the letter in English are found at https://orthodoxtimes.com/letter-from-the-archbishop-of-cyprus-to-the-ecumenical-patriarch-how-i-made-the-decision-to-commemorate-metropolitan-epifaniy/ and https://orthochristian.com/134963.html.  The four metropolitans of the Church of Cyprus, who wrote a strong statement attacking the commemoration of Epifany by Chrysostomos, have continued to voice their strong disapproval.  There is some indication that a fifth hierarch, Metropolitan Neophytos of Morphou, believes that Metropolitan Onufry is the sole primate of the Ukrainian church.   https://orthochristian.com/134988.html  Even so, the five still represent a minority of the 18-member Synod of the Church of Cyprus.

After the commemoration of Epifany by Chrysostomos, the Moscow Patriarchate released a letter, dated July 26, 2018, from Chysostomos to Patriarch Kirill on the occasion of the 1030th anniversary of the Baptism of Rus.  https://mospat.ru/en/2020/10/28/news187525/ (English)  The July 2018 letter includes the statement:  “And for this reason the Church of Cyprus will never deviate from her position, which we have set forth for you on many occasions, that is to say, we will use all our resources to support the position of the Russian Orthodox Church on the issue of the so-called autocephaly in Ukraine.  She believed this position to be fair and wholly justified.  In it are your spiritual roots and you cannot be torn away from them.”  It should be noted, however, that this letter was sent several months before the Ecumenical Patriarchate first indicated that it would be granting autocephaly to the church in Ukraine.

In Serbia, Metropolitan Porfirije of Zagreb and Ljubljana (Serbian Patriarchate) has given an interview to the major Serbian newspaper Politika concerning the discharge of full professor Rodoljub Kubat from the Orthodox Theological Faculty of the University of  Belgrade.  http://www.politika.rs/scc/clanak/465256/Pokusavaju-da-eliminisu-Bogoslovski-fakultet-iz-akademske-zajednice  The title of the interview is:  “They are trying to eliminate the Faculty of Theology from the academic community.”  The Metropolitan, who is himself a graduate of the Faculty, stated that the decision of the Holy Synod “was preceded by long-term anti-church and anti-faculty activities of Dr. Kubat, which irreversibly damaged the most important institutions and reputation of the Serbian Orthodox Church through social networks, printed and electronic media, as well as in other direct and indirect ways.”  The Metropolitan explained that the Teaching-Scientific Council of the Faculty almost unanimously asked the Holy Synod to review Dr. Kubat’s competencies for possessing a work permit at the Faculty.  The Synod subsequently revoked the license of Dr. Kubat to teach at the Faculty.  According to the statute of the Faculty, such a license is required for teaching.  The Metropolitan maintains that this license requirement “is completely in accordance with relevant regulations such as the Labor Law, the Law on Higher Education, and the Statute of the University, as well as the Statute and Rules of Procedure of the Orthodox Theological Faculty.”  He believes that there are individuals who see the Kubat case as an opportunity to eliminate the Faculty from the academic community as was done during the communist era.  He asserts that some university teachers and official are using the matter to divert attention from their own problems at the University. Approximately 200 teachers at the University have now signed an open letter to the rector the University supporting Kubat and providing arguments why his dismissal was improper.  https://pescanik.net/otvoreno-pismo-rektorki-ub/ (actual petition);  https://www.danas.rs/drustvo/na-slucaju-kubat-se-prelama-buducnost-beogradskog-univerziteta/ (article discussing the matter)   Kubat has stated that excluding the Faculty from the University would be bad for everyone.  https://www.slobodnavojvodina.rs/slobodna-vojvodina/kubat-ako-mi-daju-otkaz-bogoslovski-se-izopstava-iz-bu/  With respect to the current problem, he does not blame the Faculty but rather “a handful of people who enforce arbitrariness.”

In other news, Father Nikolay Balashov, deputy head of the Moscow Patriarchate’s DECR, has called the installation of a fake ceiling in the Church of the Chora Monastery in Istanbul for the purpose of hiding the historic Christian frescos a “horror of modern-day barbarity” and “a disaster for Orthodox Christians [actually for all Christians].”  http://www.interfax-religion.com/?act=news&div=15941