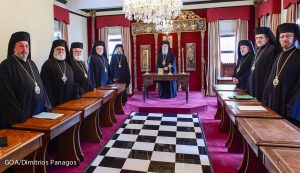 BOSTON, MA – His Eminence Archbishop Demetrios of America and members of the Holy Eparchial Synod of the Greek Orthodox Archdiocese of America will travel to the Ecumenical Patriarchate in Constantinople on August 30.

First, they will have an audience with His All Holiness Ecumenical Patriarch Bartholomew, following a meeting with the Patriarchate’s Holy and Sacred Synod. The goal of the visit is an attempt to reverse Bartholomew’s and the Synod’s decision regarding the cancelation of the election of Bishop Sebastian of Zela to Metropolitan of Chicago.

TNH has learned that it is expected that all the members of the Eparchial Synod will travel to the Phanar except Metropolitan Gerasimos of San Francisco, who is staying behind for health reasons. Gerasimos told TNH that “I will have minor surgery on my foot, which coincides” with the planned trip. When asked what he thinks will happen at the meeting he said “I don’t want to make any comment because I don’t know. It will depend on the patriarch and the Holy Synod.”

Bishop Sevastianos gained 7 votes out of 8 for the Triprosopon (three-person ballot) during the Eparchial Synod’s vote on July 6. The Triprosopon was comprised of Sevastianos, Archimandrite George Nikas, presiding priest at the Holy Trinity parish of Salt Lake City, UT, who received three votes; and Archimandrite Gerasimos Makris, presiding priest of the Holy Cross parish in Brooklyn, who also received three votes.

The Synod was comprised of Archbishop Demetrios, presiding, and Metropolitans Methodios of Boston, Isaiah of Denver, Alexios of Atlanta, Nicholas of Detroit, Savas of Pittsburgh, Gerasimos of San Francisco, and Evangelos of New Jersey.

All voted for Sevastianos except for Gerasimos, who made clear to Demetrios and the other Synod members his preference for a candidacy of Metropolitan Nikitas of Dardaneles.
The result of the selection process was sent to the Ecumenical Patriarchate for the official election by its Holy Synod. Sevastianos was Demetrios’ choice.

The Patriarchate has the right and privilege to cancel the selection of the Synod’s three- person ballot. The practice thus far was that the Patriarchal Synod was to elect the candidate who receives the majority of the votes in the Archdiocesan Synod ballot.
The Holy and Sacred Synod in its meeting decided to cancel the election of Sevastianos and via an official letter requested that Demetrios enhance the List with more names of archimandrites and hierarchs presently serving in metropolises outside the United States but who have served in the Archdiocese.

The Eparchial Synod did not honor the directive, but instead said more clarifications are needed from the Patriarchate. Thus, they defied the Patriarchal Synodical decision to revise the List.

In an unprecedented move they decided that the archbishop with a representation of hierarchs travel to Constantinople to try to convince Bartholomew to reverse the initial decision. That approach was decided on July 20 in a special Eparchial Synod session convened by Demetrios. All the Synodical hierarchs were present except for Isaiah. Demetrios then requested an audience with the Phanar, which was granted.

TNH has learned that the Archdiocese is almost in a bankrupt situation to the point that it cannot meet necessary obligations. The annual budget is $30 million. For the last 18 years, the person in charge of the finances and administrative matters is Jerry Dimitriou, certainly with Demetrios’ blessing.

The Archdiocese was recently forced to cut off mobile phone issuance and credit cards to various employees, because there was no control. Also, firings of personnel should not be excluded.