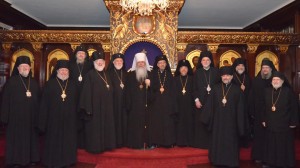 DETROIT, MI [OCA]  Members of the Holy Synod of Bishops of the Orthodox Church in America will hold their annual Fall Session at Saint Andrew’s House here Monday, October 19 through Friday, October 23, 2015.

Among the many items on the agenda are:

According to Father Tosi, “a considerable amount of time also will be devoted to discussing and planning the agenda, main areas of focus and implementation of programs and ministries for 2016 and the next triennium.”