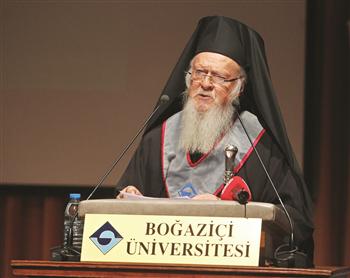 The pursuit of dialogue and peace calls for a radical reversal of what has become the normative way of survival in our world. CİHAN photo

It is once again an honor to address the Eurasian Economic Summit, which is organized each year by the esteemed Marmara Group and is today considering the topic of “Culture and Ecological Dialogue.”

Centuries ago, a Christian mystic declared: “Acquire inward peace, and thousands around you will find their peace.” In some ways, then, the dialogue for peace begins within. This in turn embraces a religious dimension, which can never be separated from genuine peace, whether locally or globally. As faith communities and religious leaders, we are obliged constantly to remind people about the obligation and responsibility to choose peace through dialogue.

Human conflict may well be inevitable in our world; but war and violence are certainly not. If our age will be remembered at all, it may be remembered for those who dedicated themselves to the cause of peace. We must believe in and “pursue what makes for peace.” (Rom. 14.19)

The pursuit, however, of dialogue and peace calls for a radical reversal of what has become the normative way of survival in our world. It demands a transformation of values that are deeply seeded in our hearts and societies, hitherto determining our relationship with those who challenge our worldview or threaten our lifestyle. Transformation in the spiritual sense is our only hope of breaking the cycle of violence and injustice. For, war and peace are systems, which are contradictory ways of resolving problems and conflicts. Ultimately, they are choices.

This means that making peace is a matter of individual and institutional choice, as well as of individual and institutional change. It begins within and spreads outside to the local and in turn to the global. Thus, peace requires a sense of inner conversion (metanoia) — a change in policies and practices. Peacemaking ultimately requires commitment, courage and sacrifice. It demands of us a willingness to become people and communities of transformation.

The various gatherings initiated or organized at the Ecumenical Patriarchate over the last decades have proved crucial in order to prepare the way for a more peaceful coexistence and closer cooperation between the world’s peoples. They serve to bring cultures together in a searching encounter and assist religious believers to establish a more meaningful form of communication with one another.

Such an interfaith dialogue draws people of diverse religious beliefs and differing cultural backgrounds out of their isolation, preparing them for a process of mutual respect, understanding and acceptance. It is our unswerving conviction that when we truly desire this kind of encounter and communication and our hearts sincerely seek these, then we will somehow find ways to coexist in spite of differences in our faiths and in our cultures.

In fact, historical conflicts between Christians and Muslims normally have their roots in politics and not in religion itself. Speaking of an inevitable and inexorable “clash of civilizations” is neither correct nor valid, especially when such a theory posits religion as the principal battleground on which such conflict is doomed to occur. It may sometimes be the case that national leaders try to bring about isolation and aggression between Christians and Muslims; or that politicians or demagogues mobilize religions in order to reinforce fanaticism and hostility among nations. However, this is not to be confused with the true nature and purpose of religion.

Christians and Muslims have lived together, sharing the same geographical region, in the context of the Byzantine and the Ottoman Empires, usually with the consent or support of the political and religious authorities of these two monotheistic religions. In Andalusia, Spain, believers in Judaism, Christianity and Islam coexisted peacefully for centuries. These historical models reveal possibilities in our own world, which is shaped by pluralism and globalization.

It is overly simplistic to distinguish sharply between the cultures or civilizations of “East” and “West,” as if the two are unrelated or can never converge in any meaningful or creative way. Moreover, it may be helpful to recall a fact that is rarely acknowledged by historical commentators and political scientists. As the Byzantine historian Alexander Vasiliev (1867-1953) observes:

Perhaps the cultural influence of both the Byzantine Empire and Islam may be noted in the origin and progress of the so-called Italian Renaissance. Classical knowledge, which was carefully preserved by Byzantium, and various branches of knowledge which were not only preserved but also perfected by Arabs [and Ottomans]played an essential role in the creation of the new cultural atmosphere . . . a connecting link between ancient culture and our modern civilization. Here we have an example of the cultural co-operation of the two most powerful and fruitful forces of the Middle Ages – Byzantium and Islam.

Perhaps, then, it would be more appropriate to focus our imagination not on some inevitable clash of civilizations, but on the mutual enrichment that can occur between different, diverse and distinct cultures. This is a hope expressed in a paradoxical way by a contemporary Turkish writer, Turan Oflazoğlu (b. 1932): “What we need is to enrich ourselves with those aspects of foreign culture, which are not congenial to our nature.”

This is precisely why a dialogue, which acknowledges differences but also suggests ways to negotiate differences, may prove helpful to map out appropriate avenues of communication between cultures and nations. It is the only way of discovering the peace that is within in order to realize a peace that is local, which in turn materializes a peace that proves truly global.

This is the speech by Patriarch Bartholomew at the 17th Eurasian Economic Summit in Istanbul.