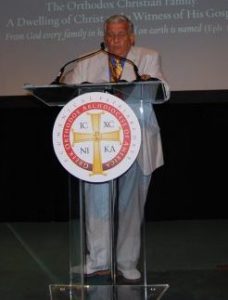 BOSTON – Dismissed Archdiocese Finance Committee chairman Mr. George Vourvoulias in an exclusive interview with The National Herald spoke about his dismissal, the $900,000 he received for his expenses, the $8.5 million deficit, the $15 million from St. Nicholas reportedly unaccountable at the September 26, 2017 meeting, Archbishop Demetrios, Bishop Demetrios of Mokissos, and the work of the Finance Committee.

The National Herald: Is it possible to comment about your dismissal from the chairmanship of the Finance Committee?

George Vourvoulias: I don’t know if it would be proper or not since nobody knows about it and how do you know about it?

GV: I asked, how do you know about it?

TNH: I am sure you don’t expect me to tell you. What is your comment Mr. Vourvoulias?

GV: I was asked to step down and I said fine that is it.

GV: I am not discussing the $900,000 it is a highly inflated figure and that is something that you should ask them about. Every bill that I sent was paid by them and it was properly backed up, and that is all I can tell you. If they have problems internally let them prove it or disprove it or do whatever they want. Let me tell you this, if someone sends in a bill and it is paid undocumented it is shame on them.

TNH: Who authorized these payments?

GV: Wherever the bills went. They went to the Finance Department.

TNH: Are you going to step down from the Executive Committee of the Archdiocesan Council?

GV: No, no to my knowledge, maybe I am off the Executive Committee, I don’t know.

TNH: Do you have a comment on the $8.5 million deficit?

GV: I have seen nothing that will indicate that.

TNH: You were the chairman of the Finance Committee.

GV: We looked at all the financial statements and nothing showed any kind of a deficit.

TNH: But how did this deficit came about?

GV: I do not know if there is a deficit and Fr. Baroody seems understand it he has been there for seven years, he is the controller. I have asked for the information and I have not received it. I have been shut down from any information at the Finance Department for weeks now.

GV: Ask Fr. Baroody, he is legitimately responsible for any reports that come out.

TNH: Do you have any comment about the dismissal of Jerry Dimitriou?

GV: Jerry was a very hard working man for 27 years at the Archdiocese. A lot of things hit on his shoulders. I do not know much about the inner workings, I know about the Finance Committee meetings and what we have done and how we have met and how we have allocated the money.

GV: The Finance Committee meets once a year to decide allocations based on the information that each and every parish sends to their Metropolis and it is totally reviewed by every Metropolis, it is not made in the office at the Archdiocese. That assignment is made by a joint committee representation from each and every Metropolis of at least two members and then at the end of the meeting everybody agrees that is how the allocation is made for the last seven or eight years.

TNH: Do you have any idea of what happened to those $15 million that was unaccountable?

GV: I do not know that it is unaccountable, I have never seen the figure $15 million. Trust me if you go and listen to the meeting nobody knows. People in the Finance Committee don’t know. If you take a look at the management letters of the audit there is nothing to say that there is $15 million dollar loss.

TNH: It was in the meeting on September 26 in the presence of His Eminence Archbishop Demetrios that $15 million was unaccountable.

GV: We are not privileged to those meetings. We have never being asked for any assistance for any of these problems and you can call anyone in the Finance committee. They completely sat us out.

TNH: Are you going to the upcoming meeting of the Archdiocesan Council in New York on the 19 to 21 of this month?

GV: I am going to be there and I have questions to ask as do other people. The meeting is on Thursday, October 19. I do not know if they call Finance Committee meeting because we asked for time to meet as a Finance Committee as we normally do but we were not given a room. In 12 years of 14 years of doing this the Finance Committee is a standing Committee of the Archdiocese and it is setting its own agenda. Never once we ever asked the Archdiocese or the Archbishop for a meeting date. We have if we wanted to see him but we meet 4 to 5 times a year in different locations to accommodate everybody and we don’t stay at grandiose hotels; we simply stay at a Hilton Garden Inn or Hawthorns, very inexpensive hotels. The monies that we spent to pay meetings costs and bills were legitimately given, and we were paid by whatever the process is at the Archdiocese. We sent them in to the Finance Department. I do not know what the process is from there but we get a check. They had to be documented. My bills were questioned once or twice, and that is the process.

TNH: But you were volunteer, your position was not a paid position, and nobody in the past was reimbursed for expenses.

GV: Many have, I have proof, too, many have. You know in business, people’s expenses are paid. We went out traveling all over the country and I had to spend a lot of my own personal money and then got to point and I said I can’t do it anymore and I made that arrangement and you know what that story is.

TNH: How much did the Archbishop know about the Finances of the Archdiocese?

GV: How do I answer that?

TNH: Any way you want.

GV: I love His Eminence; he is a wonderful person however for some of the things that I have heard the Patriarch asked for another million dollars for 2017. I stood up at an Executive Committee meeting along with Jerry Dimitriou, George Matthews, and we said there are no way we can pay this money. The Archbishop said we have to do something and we split it half a million this year and half next year and I said I don’t know where we are going to get it and I told this to Psaros and Tsandikos. The parishes are giving honestly based on their expenses but we have lost our two donors and we need to find new money that is exactly what we told them.

TNH: Are you referring to Jaharis and Bouras?

GV: Yes, we lost them. They were very generous, good people. I don’t like the scandal because it hurts the Church. My particular desire to see Bishop Demetrios as our Metropolitan is from years of work with him and for the years I know the situation in Chicago, he is a good man.

TNH: Where are we going as a Church under Archbishop Demetrios and this administration?

GV: That is a loaded question. I think spiritually, he is a fine man. He knows the semantics of the Orthodox Church; nobody is as well-versed as he is. I think he is like Iakovos, His Eminence, I have seen him many, many times, he is a gracious and a nice gentleman. I do think, maybe, he doesn’t have the administrative qualities Archbishop Iakovos had, but he has surrounded himself with a different type of people and it is a little difficult to say where the Church is going to go.

TNH: Do you think it is time for Archbishop Demetrios to go in peace.

GV: I hope and pray that he won’t suffer from this situation. He is a wonderful individual. If I think it is time, I have not the slightest idea; we can’t get a Metropolitan in Chicago which is one of the best organized and the most supportive under Iakovos and Mokissos. I don’t think anybody should retire as long they are useful. I do think that sometimes His Eminence under the pressure of those who are mostly around him and he doesn’t get the full story. It is not my call; it is the Patriarch’s call. If the Patriarch knows what is going on here in America, I think he should step up and take care of it.