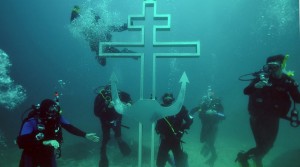 Divers in Crimea have erected a large cross in the shape of an anchor off the Crimean coast. It heralds the start of construction work on building what they promise will be a full blown underwater church.

The three-ton cross is just the beginning of an ambitious plan by Archimandrite Tikhon, a diving enthusiast and the project’s initiator.

“The underwater church will look like a church. There will be icons inside – just like in a real church. Most probably they will be bas-reliefs of icons in stainless steel or stone,” RIA Novosti cites him as saying.

He said that architects are currently working on the details and that the winter storm season will show whether the divers placed the cross correctly.

The cross is 20 meters below sea level, 200 meters from the Crimean shore in a place called Cape Fiolent. A buoy will be attached to allow divers to locate it more easily. In a bid to attract more visitors, the cross’s exact location will be mapped.

Before the summer season ends, divers also plan to install a table and massive concrete candle holders near the cross. Archimandrite Tikhon also wants to turn the underwater spot into a kind of museum of Crimean history with fragments of ammunition and military ships on site. The exhibits would date back to two of the largest and lengthiest military defense operations in the area – in 1854-1855 and 1941-1942.