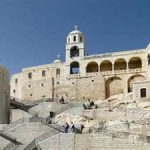 Our Lady of Saidnaya Convent

Saidnaya – Divine intervention prevented a shell that pierced the walls of a Syrian convent from detonating, swears the mother superior of Our Lady of Saidnaya, a spiritual retreat near Damascus.

“The Virgin Mary stopped the shell from exploding with her own hands,” said Mother Verone, who interpreted the close call as a divine message that “God is watching over sacred places” amid the unprecedented unrest rocking Syria.

The sound of explosions and gunfire from nearby towns echoes around the normally tranquil convent.

The nuns say the blasts come from the neighbouring towns of Rankus and Talfita, focal points of a military operation to purge the outskirts of Damascus of army deserters and rebels.

“I saw a flash of light coming from the hill opposite the convent and then heard the explosion,” said a young law student who is a resident.

“I didn’t imagine that it could be a shell. I only understood that one had landed very near us once I heard the explosion and left my room,” she added.

Over the hills lies the besieged town of Rankus, with a population of 25 000, where the army this week spared no effort to uproot rebels.

Regime forces on Tuesday began blowing up houses in the protest hub, 40km north of Damascus, said an activist on the ground.

“This morning they started to blow up houses in Rankus. They are using diesel to set fire to buildings,” said Abu Omar, a spokesperson for the town.

President Bashar Assad’s regime, which claims to have the public’s support in what it labels a security campaign against “terrorists”, has ramped up its operations in recent days, in an apparently calculated move that banks on Russia’s support and cracks in the international community.

The opposition Syrian National Council called for a “day of mourning and anger” on Tuesday in response to the bloody crackdown that has left nearly 200 people dead in the past three days, according to activists.

Founded in 547 AD, the convent of Our Lady of Saidnaya, is a leading Antiochian Orthodox nunnery which overlooks a mountain village of the same name, just 35km from Damascus.

The convent includes a school for orphans, whose costs are covered by private donations, according to a brochure distributed by the complex.

The nunnery is a major pilgrimage centre and lies not far from the villages of Jabadin and Maalula, where people still speak Syriac, the modern version of Aramaic, the language of Christ.

The Greek Orthodox Church of Antioch has its seat in nearby Damascus.