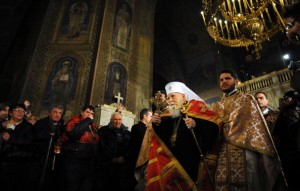 Bulgaria’s Orthodox Church has called on its government not to let any more Muslim refugees into the country to prevent an “invasion”.
The Balkan EU member has largely been bypassed by the hundreds of thousands of refugees fleeing conflict and poverty, many of whom set off from Greece through neighbouring Macedonia and Serbia towards northern Europe.
But Bulgaria has still seen Syrians, Afghans and Iraqis cross its southeastern border from Turkey.
“We help refugees who have already arrived in our motherland, but the government must absolutely not let more refugees in,” the church, which claims 80 percent of the population as its followers, said late Friday on its website.
“This is a wave that looks like an invasion.”
It added that the problems in the refugees’ countries of origin “must be resolved by those who created them and the Bulgarian people must not pay the price by disappearing”.
About 13 percent of Bulgaria’s population are Muslims, including ethnic Turks, descendants of Bulgarians who converted to Islam during five centuries of Ottoman rule, and some Roma.
Bulgaria was accused of trying to ethnically cleanse its Muslims shortly before its dictatorship fell in 1989, when around 360,000 Muslim Bulgarians fled to Turkey. Nearly half later returned when the country launched its democracy.
Europe’s worst migration crisis since World War II has sparked concern in some quarters, as many of those taking the perilous journey are Muslim.
In France, several mayors said they would only take in Christian refugees, earning them a rebuke from the government.
The issue has played into the hands of the far-right across Europe, which hopes to turn fears of an “invasion” into electoral success.
Bulgaria’s Prime Minister Boyko Borisov said Friday he was “concerned” over a potential massive influx of migrants in the coming months.
“I’m scared and the Bulgarian people are scared, if only where religions are concerned. We are Christian, they are Muslim.”
[subscribe2]
Share. Twitter Facebook Pinterest LinkedIn Tumblr Email
Previous ArticleWhy Tsar Nicholas II and his wife Alexandra have been exhumed
Next Article John T. Tavlarides, longtime priest at Greek Orthodox cathedral, dies at 84