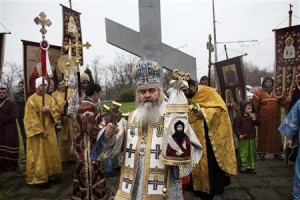 The death last week of one of Bulgaria’s most senior bishops, found floating in the Black Sea wearing a snorkel and flippers, was mysterious in its own right, but it was only the final chapter in an enigmatic life.

[VARNA, Bulgaria] In the days after Bishop Cyril of Varna, 59, was found dead, a picture emerged of a man respected by many but who had also spied for the communist-era secret police, brokered land deals that raised questions and driven a luxury Lincoln sedan given to him by a local businessman.

Through it all, he was never investigated or disciplined, making him a kind of symbol of modern Bulgaria, the European Union’s poorest member, where graft and organized crime often go unpunished and where many people feel public institutions – from the Church to the government – have betrayed their trust.

The funeral of the Orthodox Christian clergyman last Thursday in Varna, on the Black Sea coast, was attended by hundreds of mourners, including the Bulgarian president.

Also among the mourners was 72-year-old Ginka Petrova. Her memories of Bishop Cyril were tied in to the 2012 Lincoln MKZ Hybrid he drove around in. The car’s price is listed now at $35,000, or five times the annual wage of the average Bulgarian.

Petrova, who sings in a Varna church choir, recalled the bishop’s appearance in the car on Epiphany, a holy day in the Orthodox faith celebrated on January 6 each year.

“It is a pity,” she said. “He did not get out of the car but sprinkled people with holy water … through the car window.”

His death caused speculation in Bulgaria’s media about possible foul play – not surprisingly in a country where mafia-style hits were for years commonplace. An autopsy concluded he had died of drowning and found no signs he had been attacked.

Fishermen and friends of the late bishop said he often went alone to dive for mussels that stuck to the concrete jetties on the secluded stretch of coastline where he was found.

At his funeral service, people who knew Cyril spoke of an energetic man who in 24 years as bishop built and restored some 70 churches and chapels, ordained dozens of young priests, ran soup kitchens and supported a drug rehabilitation center.

“He was a great, holy man, very sporty, very open and down to earth,” said Mladen Stanev, a businessmen from Varna who often met Cyril and shared with him a passion for snorkeling.

Like many people of his generation in Bulgaria, the bishop lived a complicated life, in which the lines between communism and religion, public service and private business interests, right and wrong, were frequently blurred.

Born Bogomil Kovachev, he was recruited at the age of 22 by his uncle, a colonel in the communist secret police organization Darzhavna Sigurnost, to work as an informer.

The secret police file on him, now available to the public, shows that he wrote reports for his handlers during the late 1970s when he was a young monk and student of theology in neighboringGreece, on the other side of the Iron Curtain.

He was sent as a representative of the Bulgarian Orthodox Church to Moscow in 1981. He stopped his work for the secret services, but the files show he was “activated” again after he was appointed Bishop of Varna in early 1989.

At the time, secret police connections were often required to reach senior positions in the church, historians say.

“His rapid career was a direct result of his work for Darzhavna Sigurnost,” said Hristo Hristov, a journalist who researches the files of the former secret police.

After Bulgaria’s communist leader Todor Zhivkov was toppled in 1989, Cyril had to navigate a new world of capitalism.

In 2007, his diocese agreed a deal under which it gave a parcel of church-owned land near the village of Rogachevo to a private company, in exchange for another plot of land nearby.

An investigation the same year by broadcaster BTV alleged that, based on market values at the time, the land that was given to a private company was worth 200,000 euros, while the plot the church was given in exchange was worth 20,000 euros.

A Church spokeswoman said the Holy Synod does not interfere in the management of land that belongs to dioceses, so it has not looked into the deal. She said Cyril was a good manager who had fought to restore church land seized under communism.

Early last year, Cyril’s past life as a secret police informer was exposed when the police files were made public.

He was one of 11 Bulgarian bishops found to have worked for the secret police – a revelation that shook public trust in the 1,100-year-old Orthodox Church to which around 80 percent of Bulgarians at least nominally belong.

Some of the 11 bishops sought public forgiveness but Cyril refused to apologize, saying he had repented to God long ago.

“My conscience is clear,” he said. “I do not think that I was any sort of an agent. That was the state policy then, they wanted explanations, what was I to do?” he said.

The Church has not taken any action against Cyril or any of the other bishops who collaborated with the secret police. He carried on as bishop and even had a stint this year as caretaker head of the Bulgarian Church after the death of Patriarch Maxim.

In February, Bulgarians staged nationwide protests against official corruption, the lack of accountability of public institutions and low living standards.

The protesters forced center-right prime minister Boiko Borisov – who once served as bodyguard to Zhivkov, the communist leader – to step down, briefly raising expectations that a new leadership, less associated with the past, would emerge.

But the new ruling coalition is led by the Bulgarian Socialist Party, heir to the old communist regime, and has already been accused of cozy ties to business interests. The protests have resumed.