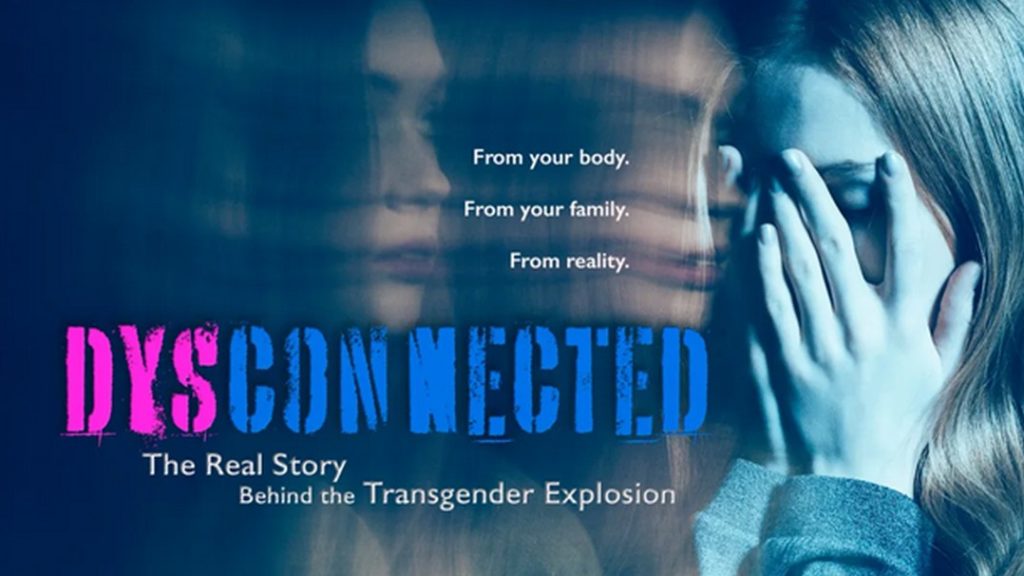 As puberty hits for a young girl, imagine the additional earth-shaking and existential uncertainty caused by wondering whether she might actually be a man trapped in a woman’s body. She starts on puberty blockers, moves on to cross-sex hormones, and even goes through with top surgery (a double mastectomy). But she realizes shortly thereafter that these extreme and invasive interventions didn’t relieve her distress. The euphoria of each phase was short-lived as the familiar struggles returned and nothing really improved. This is the tragic story of many young people today who are being steered into so-called “gender affirming” care, only to realize that it doesn’t work in the long run.

With teens increasingly identifying as non-binary and transgender, this other side of the story needs to be told. Don Johnson’s new documentary Dysconnected: The Real Story Behind the Transgender Explosion does just that—and much more. Through a combination of powerful personal stories and interviews with top-notch scholars and medical experts, Dysconnected explores why transgenderism is on the rise, the understanding of human nature that is driving it, and how Christianity’s vision of male and female provides a much richer alternative.

The film begins with gripping video footage from a teen named Daisy who followed the exact “gender-affirming” progression explained above. Hearing and seeing the real video she recorded of her teenage self as she documented her F2M (female-to-male) transition made me sit up in my chair and lean in. Her first-person account is captivating and offers an ideal launching-off point for exploring the many factors that lie behind this transgender moment.

Daisy’s story is woven throughout the film and her frank and clear articulation of her experiences and the broader societal issues is one of the most compelling aspects of the film. And, as the film concludes, Daisy’s recent life events make for a wonderfully surprising and redemptive ending—or perhaps more accurately, a merciful gift and new beginning. The film’s conclusion brought my wife and me to tears.

One of the insidious aspects of transgenderism uncovered in the documentary is medicine’s bowing the knee to the LGBT agenda. Plastic surgeon Patrick Leppert shines throughout the film in exposing exactly how this has happened. He explains that by the time plastic surgeons have patients referred to them for gender transition surgeries, the diagnosis and treatment plans are already well-established, frequently originating from a child’s self-diagnosis many years prior. Leppert explains:

You’ve got a thirteen, fifteen, seventeen-year-old young lady who’s going to have a mastectomy, and the plastic surgeon is relying on a diagnosis that was made by that child perhaps ten years before. And nobody has waived a flag on this and said, ”Wait a minute, what are we doing here?” The plastic surgeon at that point is a technician, and that is contrary to everything I learned as a surgeon.

Leppert also explains how the DSM-5 (Diagnostic and Statistical Manual, the definitive text used for psychological diagnoses) has been modified not because of any new research or data, but to fit the transgender narrative. Gender Identity Disorder has been depathologized into the more nebulous and neutral Gender Dysphoria, which then gives way to affirming a cross-gender identity, rather than treating what really is a body dysmorphic disorder.

Ryan Anderson reveals this for what it is: “totally Orwellian language in which performing medical interventions to transform a girl into someone who identifies as a boy is considered affirmation, but affirming that the girl is actually a girl is considered conversion.”

There are many more lines of thought the film deals with, all of which make the documentary an excellent resource to help each one of us better understand and address this vital issue. Many of the contributing factors in transgenderism’s rise are clearly expressed (autism, peer pressure, pornography, trauma, profit, and more). And the group of scholars, experts, and activists interviewed in the film are a veritable dream team (Abigail Favale, Pamela Garfield-Jaeger, Maria Keffler, Michael Hanby, Walt Heyer, Carl Trueman, and many more). The detransition stories are especially powerful. All of this is further evidence of film-producer Don Johnson’s expertise and professionalism.

Of course, reviewing any film or book leads to some suggestions for further exploration. While each of the film’s segments are informative and clear, there could have been a bit more in connecting them all together and explaining how much each of the factors contribute to transgenderism. Also, another topic beyond the scope of the film is why boys are transitioning. I will say as well, there were just a few quotes from a few of the interviewees that could possibly give the wrong and trite impression that asking Jesus into your heart fixes all these problems. Certainly, that is not the intention, and the overall thrust of the film offers a much more robust and realistic picture. However, I do think it is important to clarify that life in this world is messy and broken and filled with suffering, even if one becomes Christian.

While the film doesn’t have the flair, funny, or flash of Matt Walsh’s What is a Woman, I would suggest it is more informative and offers a clearer answer to the question of “What is a woman?” As Abigail Favale recently noted in a review of Walsh’s film, “What is a Woman is a potent critique of gender identity theory, but it fails to give a satisfying answer to its own question….Walsh’s critique is forceful; he easily topples the postmodern totems of gender identity. But what does he have to offer in its place? Any alternative vision is weakly articulated and mired in tired stereotypes….There is little inspiration here.”

Favale suggests, “a better place to anchor the discussion is procreative potential—this is a matter not simply of discrete body parts, but rather the organization of those parts: the totalizing structure of the body as a whole.” And this is the direction that Johnson’s Dysconnected heads.

Walsh’s What is a Woman may result in us patting ourselves on the back or high-fiving our buddies for not falling for trans ideology, but Johnson’s Dysconnected offers a clearer answer to the question of what is a woman and concludes with a moving and beautiful counter-cultural alternative of what men and women are actually made for: union with God, a one-flesh marital union with one another, and the new gift of life that emanates forth from that union—all of which God’s Edenic pronouncement declared, “very good.” As Christopher West rhapsodizes in the film’s closing segment,

Christianity has always stood in marked contrast to the dualistic rupture of body and soul by proclaiming not a salvation from the flesh, but a salvation of the flesh. Christ took on flesh to redeem our flesh….

The Christian religion is not, as it is often thought to be, a flight from the body to reach a spiritual reality. It is rather the opposite movement. It is God taking on a body to reach us…

This is our faith. Our faith as Christians centers around Christ – the Word made flesh. And that’s where the war is. It’s a war for incarnation versus excarnation. And what we’re living in today, this gnostic split where the body has no say on my identity, that’s the religion of the anti-Word, that’s the religion of excarnation. We must proclaim faith in the incarnation. This is our salvation.

The film’s World Premiere will take place at the Freed Theater in Garden Grove, CA on Saturday, October 8th and will include a panel discussion with several interviewees from the film, including Daisy. Tickets for the event can be purchased here. The film will be available to stream worldwide starting on October 9th.