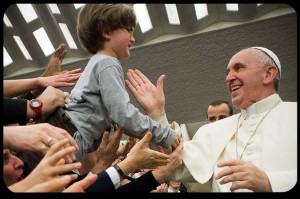 A grass roots ecumenism involving Christians of East and West is what will take Christians into the future together.

When referring to the Eastern Orthodox churches Pope St John Paul II used to say the church needed to “breathe with two lungs.” Given Pope Francis’s physical condition of having only one lung, perhaps it is best to discover a new analogy. Looking at the cross we can say that Christ needs two arms to reach out to embrace the whole world.

In his trip to Turkey last week Pope Francis celebrated the liturgy with Bartholomew, the Ecumenical Patriarch of Constantinople. Historically, the Patriarch of Constantinople has represented the confederation of Eastern Orthodox Churches. He also stands symbolically for the apostle Andrew who evangelized the East, while his brother Peter went to Rome. St Andrew’s feast day at the end of November is therefore a time for “Peter” to meet his brother “Andrew”.

This year’s meeting between Pope and Patriarch took a fresh direction. Rather than calling the Eastern Orthodox Christians to engage in yet more theological and ecumenical dialogue, Pope Francis called on Catholics and Orthodox to work together to relieve poverty and fight for justice and peace in the world. This, the pope claimed, would show the world the goodness and beauty of the Christian faith, inspiring the young to embrace a genuine goodness that leads to Christ.

Both Pope Francis and Patriarch Bartholomew would agree that the Christian faith is more than simply helping the poor and working to end war and injustice. Repeatedly, Pope Francis has warned against the church becoming no more than another humanistic do-gooding charity.

The idea that the Eastern Orthodox and Roman Catholic churches might reach out with two arms to embrace the world is a positive way forward in the steady, but sure road to unity. To do this effectively, the Christians of the East and West must not only roll up their sleeves and work together, but they must also drop their suspicions and learn from one another.

A Lutheran convert and blogger, Billy Kangas found his way to the Catholic faith through a detour into Eastern Orthodoxy. In a pair of blog posts , he outlines what Eastern Christians can learn from the West and vice versa. The Western church, Kangas claims, is better at inculturation and therefore has a wider and deeper tradition of spirituality. Paralleling this, the Western church has a more thorough understanding of incarnation. Kangas writes, “This can be seen in the use of the crucifix as a central symbol in worship, it can be seen in the West’s willingness to change their calendar to better reflect the actual position of the earth in relationship to the sun, it can be seen in the West’s more realistic art and statuary, it can be seen in the West’s spirituality that is focused more on the historic events in the life of Jesus through prayers like the rosary and Ignatian contemplation.”

Because of a deeper incarnational approach, Kangas claims the Western church has also has a more consistent theory of peace, justice, and socio-political involvement. He observes, “The West has thought deeply about how to live out Christ’s love in the world, and they have lived lives that reflect that love in powerful ways. The religious life of the West tends to be a bit more action oriented. Catholic monks and nuns are often at the forefront of Justice movements in the world.”

In his praise of the West, Kangas does not disparage the East, for just as West has much to offer East, so the Eastern tradition has much to offer the West. He acknowledges that the East has maintained a liturgical authenticity and integrity that has been too often lost in the West. “The Eastern liturgy teaches us about God,” Kangas says, implying that the Western liturgy is too often man-centered. From the East comes a deep understanding and experience of the Holy Trinity as a dynamic unity. For the Orthodox, the Holy Trinity is not a theological theory, but a dynamic experience. The “Jesus Prayer” or hesychasm is another light from the East. This intensely personal prayer locks the individual into a profound experience of God, while the unique iconography of the East opens windows to the transcendent.

Popes and Patriarchs may meet and embrace, but the two arms of Christ’s church will only be able to reach out to the world as Christians on both sides of the divide stop blaming one another and start learning from one another. Converts like Kangas, who come to the historic church from Protestantism, often have unique insights because they have explored both the Catholic and Eastern Orthodox traditions before making their choice.

The immediacy and mobility of the modern world means an increasing number of Christians are opening out from their narrow understanding of the faith. This grass roots, lived ecumenism involving Christians of East and West, Catholic and Protestant, is what will take Christians into the future together and empower all those who follow Christ to do so with the courage and faith of Peter and his brother Andrew.
____________________________
The Rev. Dwight Longenecker is the parish priest of Our Lady of the Rosary in Greenville, South Carolina. His latest book is The Romance of Religion: Fighting for Goodness, Truth and Beauty. Learn more about it at his website, dwightlongenecker.com.