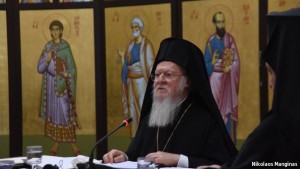 AS ORTHODOX Christian leaders prepare for what has been billed as their most important gathering for centuries, they have many problems to wrestle with. One, as widely reported already, is the chronically uneasy relationship between the two best-known of those leaders, the Istanbul-based Ecumenical Patriarch, Bartholomew I, and Patriarch Kirill of Moscow. It is Patriarch Bartholomew, in his capacity as “first among equals” in the Orthodox hierarchy who is organising and hosting the Synod; but many eyes, both wary and admiring, will be on his Russian guest, who along with his huge entourage has just toured South America, and made a foray into Antarctica.

Still, plans for the “Holy and Great Council” are on track and preparations are gathering pace. The meeting is now due to happen between June 16th and June 27th; the venue was switched from Istanbul to the Greek island in deference to the Russian participants, whose government is at loggerheads with Turkey.

But apart from finessing their various differences with each another, most of the 14 leaders, patriarchs and archbishops meeting on Crete will have to look behind their shoulders at ultra-conservative critics in their respective home patches, who find the whole idea of church diplomacy rather suspicious. Those critics will be looking out for anything that seems at variation with Orthodox tradition, or which appears to be watering down Orthodox Christianity’s claim to be the repository of Christian truth at its purest.

The Georgian Orthodox Church, one of the oldest and most traditional, has already raised a red flag: it has said that it will not sign the section of the proposed statement which refers to “relations of the Orthodox church with the rest of the world’s Christian churches”, or anything that implies that in order to achieve “Christian unity” the Orthodox must agree and combine with other bodies that follow Jesus Christ. From this purist point of view, there is only one Christian church worthy of the name and that is represented by the Orthodox. Meanwhile in the church of Cyprus, another ancient bastion of eastern Christianity, one of the island’s most charismatic bishops, Athanasios of Limassol, has made an identical objection. “The Orthodox Church of Christ…believes that the unity of those who believe in Christ already exists in the unity of her baptised children…in her correct faith,” he has insisted.

In practice, Orthodox diplomacy has found a sort of solution to the problem of defining “church” and “unity” in ways that please most parties. At a meeting in Toronto in 1950, when Orthodox bodies began joining the World Council of Churches, they insisted on a statement laying down that “membership [of the WCC]does not imply that each Church must regard other member churches as churches in the true and full sense of the word.” This formula allowed Orthodox churches to be purist and amenable at the same time, by accepting that the word “church” had more than one meaning. (In ordinary language, it has at least half a dozen.)  Some find that formula satisfactory, but ultra-conservatives don’t.

As for Patriarch Kirill, he faces a slightly different problem ahead of Crete. His recent meeting with Pope Francis in Havana gained a lot of global attention, but the very fact that he parleyed with a “heretical” bishop of Rome has stirred into action some religious nationalists in Russia (including some quite influential ones) as well as some parts of his flock outside the Russian Federation: in Belarus and Moldova, some conservative clerics and monasteries have reacted to the Havana meeting by ceasing their public prayers for Kirill.

If you think that such traditionalists will look more kindly on a meeting in Crete where all the participants are Orthodox, think again. Slavic ultra-conservatives already have a long list of grievances against Patriarch Bartholomew of Constantinople, starting with the fact that he has always enjoyed cordial relations with western churches including the Roman Catholics. They will undoubtedly denounce the Russian Patriarch for tainting himself by over-friendly association with the “liberals” of Constantinople; some already do.

As of now, none of this seems likely to derail the Cretan meeting; a more likely result is some empty chairs and a shorter-than-expected communique. But as Orthodox Christians prepare to undergo their Lenten discipline of fasting and self-examination (which this year starts much later, on March 13th, than the Western one) their world will be even more introverted than usual.