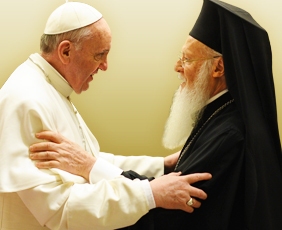 Pope Francis and Patriarch Bartholomew fraternally embrace one another.

His All-Holiness Ecumenical Patriarch Bartholomew met with Pope Francis for the final time on the Mount of Olives on Monday, May 26, 2014. At the site known as Viri Galilaei—mentioned in Acts 1.11—the Patriarch and the Pontiff met for the third and final time during their joint pilgrimage to Jerusalem and the Holy Land.

With the echo of Paschal hymns in the distance, they conferred on a variety of issues, including ecumenical dialogue, environmental ethics, interfaith relations, and religious freedom and human rights. They sealed their pilgrimage and fraternal exchange by reaffirming their commitment to advance peace, dialogue and mutual understanding among all people of the world.

The Apostolic Pilgrimage commemorated the 50th anniversary of the meeting of their predecessors, Pope Paul VI and Patriarch Athenagoras in 1964—the first time an Ecumenical Patriarch and a Pope had met in over 500 years. That historic encounter led to the lifting of the mutual and limited Anathemas on December 7, 1965.

Comprehensive coverage and photo galleries of the visit of the Ecumenical Patriarch and the Pope of may be found at www.apostolicpilgrimage.org.