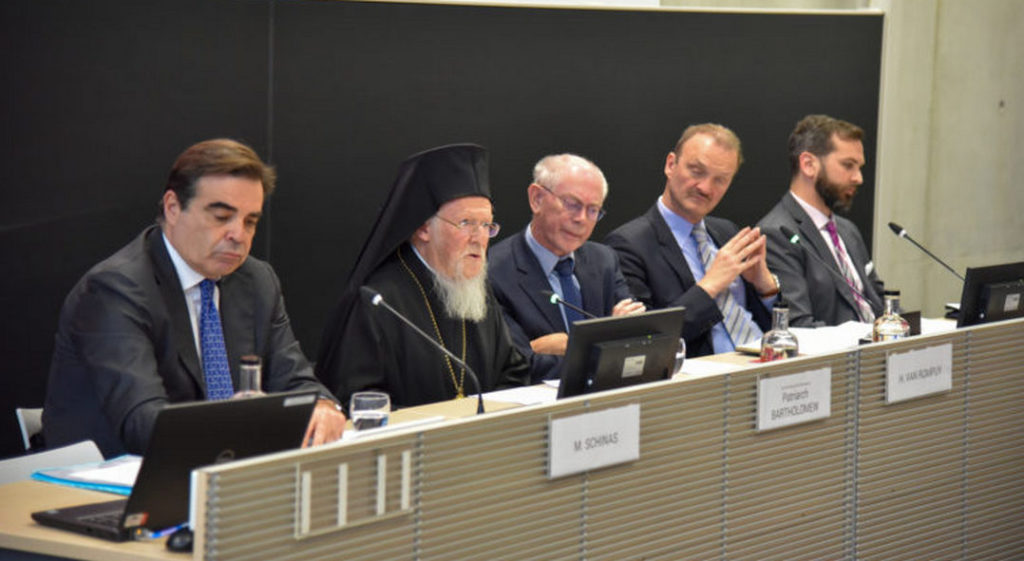 His All-Holiness Ecumenical Patriarch Bartholomew speaking at the European College of Bruges on the topic The Role of the Churches in Europe Today. Photo Metropolis of Belgium

BRUSSELS – His All-Holiness Ecumenical Patriarch Bartholomew delivered a speech at European College of Bruges on the topic The Role of the Churches in Europe Today attended by hundreds of students, professors, diplomats and many others who are interested on the subject.

His All-Holiness was on an official visit to the Holy Metropolis of Belgium on the occasion of the 50th anniversary of the creation of the Metropolis.

The Patriarch said, among other things, that “in our time we face a world changing rapidly, full of new challenges and unforeseen possibilities for development and progress. When confronted with the contemporary challenges, what should be the required stance for the Christian Churches? How could they make good use of their precious spiritual and moral heritage, their deep anthropological knowledge and their philanthropic traditions? Over the last decades, we have witnessed a re-evaluation of the role of religion for human existence. It is not by chance that, in our present day, the talk about the coming “post-religious age” has been replaced by the discourse of a “post-secular period,” in which religions claim and play a prominent public role and join all the remarkable efforts of humankind. As Pope Emeritus Benedict writes: “complete secularity” (Profanität), “which was aimed for in the West, is something deeply foreign for the civilizations of the world. They are convinced that a world without God does not have any future.”

Patriarch Bartholomew also said that “religion remains a central dimension of human life, both at the personal and the social levels. Without reference to religion, it is impossible to understand the past, to analyze the present, or to imagine the future of humanity. Unfortunately, the ongoing outburst of religious fundamentalism and the terrible acts of violence in the name of God and religion give to the modern deniers of religious faith arguments against religions and support the identification of religion with its negative aspects. The credibility of religions depends largely on their commitment to peace, the way to which is, in our times, interreligious dialogue and common witness in view of the great contemporary challenges.”

He emphasized that “dialogue is the most effective means for addressing problems and it promotes confidence and mutual acceptance. It is as such a gesture of solidarity and a source of solidarity. Never in history have human beings had the opportunity to bring so many positive changes to so many people and to the global community simply through encounter and dialogue. While it may be true that this is a time of crisis, it must equally be underlined that there have also never been greater chances for communication and cooperation. Humanity is called to react and act collaboratively, working as a whole for our common presence and future. Nobody – not a nation, nor a state, not science and technology, nor a church or a religion – can face the current problems alone. We need one another; we need common mobilization, common efforts, and common goals.”

Patriarch Bartholomew declared that “the attitude of the Orthodox Church towards the modern world is not a defensive one. We do not reject modernity and its contributions to progress. Neither do we regard it as a threat to our identity. We discern autonomy from autonomism, protection of individual rights from individualism. At the same time, we fervently call upon the representatives of modernity to avoid identifying Orthodoxy with anti-modernism, conservatism, traditionalism, orthodoxism, and ethnophyletism, as well as associating Orthodoxy with the rejection of individual rights and individualism and with the incapacity to accept secular ethics and the secular state.”

“In this spirit,” he continued, “the Ecumenical Patriarchate is also unshakably committed to openness. We engage in inter-Christian, inter-religious, inter-cultural dialogue; we discuss with secular institutions, with contemporary philosophy, and modern science. As an example of our activities we would like to especially stress on our common commitment with Pope Francis in ecological and social issues. The Church of Constantinople is widely known for its environmental initiatives. The Ecumenical Patriarchate was the first to highlight the spiritual and ethical dimensions of the ecological problem, to stress the importance of the Church’s contribution to its handling, to showcase the ecological dimensions of the eucharistic and ascetic ethos of Orthodoxy, and to propose ways to protect the natural environment. We have not only reached out to Orthodox faithful, to Christians, and other believers, but rather to every man of goodwill, while expressing our trust in the responsibility of every individual, and especially connecting our hopes of the positive contribution of all.”