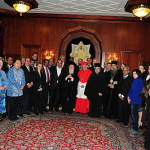 Participants of the consultation on freedom of religion with Ecumenical Patriarch Bartholomew I of Constantinople, Archbishop Alois Kothgasser and Metropolitan Gennadios of Sassima.

In a presentation to a gathering of experts on religious freedom and religious rights of minorities, the Eastern Orthodox Patriarch Bartholomew I said there must be respect for the “inherent rights of all human beings and their aspiration and rights of religious freedom should be important components to sustain tolerance among all God’s creation.”

Bartholomew made his comments on 30 November at a consultation in Istanbul, Turkey, called Freedom of Religion and Rights of Religious Minorities which is sponsored by the World Council of Churches (WCC) Commission of the Churches on International Affairs and hosted by the Ecumenical Patriarch.

“We are called to promote dialogue among all communities and peoples to create peace, harmony and tolerance in a world that is faced with violence, conflicts and religious hatred” Bartholomew, who is widely recognized for his role in promoting dialogue for peace and prophetic witness of religion for reconciliation. “In order to avoid such situations of hatred and intolerance, allowing individuals to believe, practice, and promote the religion according to their belief and choice without any obstacles are part of the rights of any individual.”