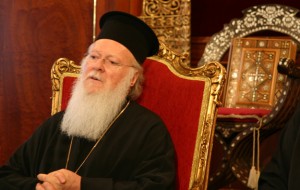 A first since the Great Schism

In a historic development, it was announced today that Ecumenical Patriarch of Constantinople, Bartholomew I, will attend Pope Francis’ installation Mass in Rome March 19, the first time such an event as taken place since the Great Schism in 1054.

Relations between Catholics and Orthodox have been improving since the Second Vatican Council through mutual visits, acts of friendship and theological dialogue.

Under Benedict XVI, the dialogue picked up in earnest after a lull. In trying to promote it, the pope suggested ways to express the primacy of Peter’s successor that could be acceptable to the Orthodox, finding his inspiration from the undivided Church of the first millennium.