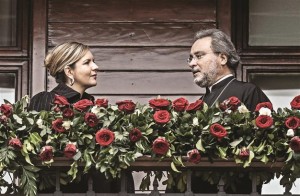 ‘I would say that ignoring the title ‘ecumenical’ is what the scriptures would call having eyes, but choosing not to see,’ John Chryssavgis (R) tells Hürriyet.

Stopping resistance to the title “Ecumenical Patriarchate” and reopening the Halki Seminary can only elevate the reputation of Turkey as a democratic nation, according to a senior official from the Fener Orthodox Patriarchate.

“The ‘ecumenical’ status is a spiritual and religious jurisdiction. It is not legal or secular,” John Chryssavgis, who holds the title of Archdeacon of the Ecumenical Throne, told Hürriyet.

“The Ecumenical Patriarch has direct authority over churches in Australia, Asia and Western Europe, as well as in North and South America. Moreover, he has the responsibility of coordinating all of the 14 independent Orthodox Churches in the world, including the Church of Moscow and the Church of Antioch [encompassing today’s Syria and Lebanon], and so on,” said Chryssavgis, who also serves as an advisor to Patriarch Bartholomew.

Chryssavgis said more communication and more dialogue between the government and the Patriarchate would help solve issues, adding his opinion that attitudes toward the Patriarchate have improved overall in recent years.

“Ecumenical Patriarch Bartholomew himself has undoubtedly played a major role in this change through his charismatic and cordial personality. There has also been significant progress achieved through such bodies as the General Assembly of the General Directorate of Foundations and the Association for the Support of the GreekCommunity’s Foundations,” he said.

In particular, Chryssavgis praised the government for the return of many properties to minority communities and for granting Turkish citizenship to bishops with formal positions at the patriarchate. He also, however, stressed that these were simply “the right thing to do.”

“The rights and privileges requested and expected by minorities in Turkey – whether Greek, Armenian, Jewish, or others – are their rightful prerogatives and lawful entitlements as citizens of this land. So, while these developments are welcome and promising, they are what every sovereign state should extend to all of their citizens, irrespective of religious or ethnic background,” he said.

Chryssavgis described the current picture in Turkey regarding religious freedom as “somewhat inconsistent.”

“On the one hand, we see clear signs of a willingness to address issues of religious freedom, especially in light of Turkey’s accession to the EU. But on the other hand, the signs are not as clear when it comes to converting pronouncements of good will into concrete legislation and practical application,” he said.