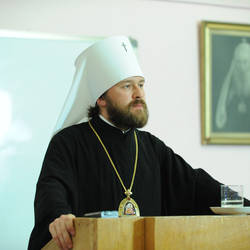 Divisions among the Orthodox Churches are delaying the process of theological dialogue with the Catholic Church on the issue of primacy. The Amman session led to another dead end

Dialogue between the Catholic and Orthodox Churches is showing no signs of progress. The latest plenary session of the mixed Commission created to deal with the theological obstacles that stand in the way of full communion between the Catholic and Orthodox Churches. The Commission’s members – 23 Catholic delegates and two delegates representing each of the 14 autocephalous Orthodox Churches – met in the Jordanian capital  from 15 to 23 September to discuss a working documented entitled “Synodality and Primacy”. The aim was to produce a jointly signed document that would mark a step forward in the work of the Commission set up in 2006 to with the task of solving the famous primacy issue: that is finding a way to define the role of the Bishop of Rome and how his primacy is exercised that is also acceptable to the Orthodox Churches. However, the Patriarchate of Moscow promptly issued a statement which said there were “a number of underlying objections”. Attempts to draft another document on the spot failed. In the end, “after a series of long discussions which unveiled serious disagreements over the question of primacy in the Church,” the Coordinating Committee of the Joint International Commission for the Theological Dialogue between the Roman Catholic Church and the Orthodox Church was given orders to reformulate the text at the next meeting, which is scheduled to take place in 2015.

The statement which the Russian Orthodox Church published on its website – even before the Catholic Church published its own official summary of the meeting on the Vatican Radio website – betrays an ill-concealed satisfaction at the outcome of the discussions: the Patriarch of Moscow continues to show intolerance towards the theological dialogue with the Catholic Church. Until now, Ioannis Zizioulas, the Metropolitan of Pergamon under the Ecumenical Patriarchate had played a leading role in representing the Orthodox Church in the discussions. Many consider him to be the greatest living Christian theologian. But this time, other Orthodox Churches also expressed their dissatisfaction with the working text, suggesting that the Russian “boycott” of the theological dialogue is not an isolated case.

The dismissed working draft addressed the relationship between the primacy and synodality, from a purely theological perspective, setting aside the historical and patristic elements which had always  been the sticking point (due to objections from the Orthodox side) in the Commission’s previous sessions. In the proposed document, the relationship between primacy and synodality, between the “primus” in terms of authority and the collegiality of bishops in the Church was theologically based on the dynamics of the Trinity, where the unity of divine nature is common to three People. But Orthodox representatives perceived this to be too “rational” and deductive and suggested scrapping the draft. Metropolitan Hilarion of Volokolamsk who represented the Patriarchate of Moscow in Amman, had an easy task ahead of him when it came to persuading representatives of other Slavic Churches to take his side. The Catholic Church’s calls for the drafting of a new document that the two sides could agree on, were politely declined.

A statement providing an official summary of the session in Amman – which was again on this occasion co-chaired by Ioannis of Pergamon and Cardinal Kurt Koch – placed special emphasis on the initiatives and words of support and solidarity, which members of the Commission expressed towards the Christians caught in the Middle Eastern unrest. But on the Ecumenical dialogue front, the feeble fruits of the Amman summit and the disagreements which emerged yet again among the Orthodox, raise doubts ahead of the Holy and Great Council of the Orthodox Church in 2016. Patriarch Bartholomew convoked the Council in order to engage in a joint effort to deal with the “new problems” which the mission and presence of the Orthodox Churches currently face. Will the heads of the Orthodox Churches manage to agree on a common approach towards ecumenism and their relationship with the Catholic Church? Or will the ecumenism issue be kept off the Council’s agenda in order to prevent rifts?

Nevertheless, Orthodox representatives who attended the assembly in Amman have confirmed their intention to continue the dialogue on primacy and synodality. No one asked for a freeze in talks, nor did anyone announce that they wanted out. In the meantime, Metropolitan Hilarion stressed the Patriarchate of Moscow’s dissociation from the Ravenna Document, the text that was approved by the Commission in 2007 in the absence of Russian representatives. The document defined the relationship between primacy and conciliarity as “mutually interdependent” and recognized that in the first millennium of Christianity, the Roman Catholic Church occupied the first place in the taxis (order of succession of the sees according to importance, Ed.)” and the Bishop of Rome was recognized as “protos (first) among the bishops of the major sees in the consensus of the assembled bishops.” According to the statement released by the Patriarchate of Moscow, the Orthodox Church of Georgia also underlined its opposition to the Ravenna Document.

In the near future, the Ecumenical dialogue between the Orthodox and Catholic Churches will have to find solutions which are not impracticable due to disagreements between the Orthodox Churches. As always, it is the Patriarch of Moscow’s actions, which carry the most weight. His objective “political” dominance risks becoming an obstacle to an authentic apostolic dynamism and makes it difficult to grasp opportunities for communion with the Catholic Church. What is striking in the context of the Ukrainian crisis, is that Moscow’s Patriarch Kirill felt it his duty to reject claims that he is one of the Kremlin’s political instruments. The nationalist outburst in Russia doesn’t seem to be doing much to help Orthodox leaders win the trust and spiritual esteem of today’s Russians: a large scale survey carried out in recent weeks shows that 36% of Putin’s fellow countrymen consider the President a “moral authority”, while on 11% of Russians can say the same about the Patriarch of Moscow.