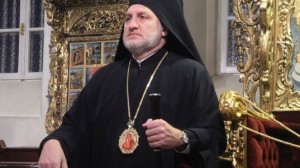 Metropolitan Elpidoforos of Bursa, Abbot of the Holy Trinity Patriarchal Monastery on the island of Chalki, is making efforts to succeed Archbishop Demetrios.

Efforts Behind the Scenes Regarding Choice of Next Archbishop Intensify

CONSTANTINOPLE – Metropolitan Elpidoforos of Bursa, Abbot of the Holy Trinity Patriarchal Monastery on the island of Chalki, is making efforts to succeed Demetrios as the future Archbishop of America, sources in Constantinople, Athens, and New York told TNH.

But Archbishop Demetrios told TNH that he has not resigned and has no intention of doing so. “No, absolutely not,” the archbishop said, calling the information “mendacity” and “fable.”

But does he intend to resign soon? Again, Demetrios responded:  “I want you to know that there is a big ‘no’ to everything that relates to resignation. As long as I am alive and I am in this [healthy]condition, God gives me health and strength and I work. There is no intention for resignation.” The Archbishop added that “these issues are up to God’s will and not man’s.”

His All Holiness Ecumenical Patriarch Bartholomew recently approached Metropolitan Methodios of Boston to see if he wanted to become Archbishop of America, but the latter declined, invoking reasons of health.

That was the second time that Methodios has declined the Patriarch’s offer. The first time was in August 1999, before the Patriarchate settled on Demetrios. At that time, Bartholomew had invited Metropolitan Methodios to Constantinople and offered him the Archbishopric Throne, to which Methodios declined also then for health reasons.

TNH has learned there were other reasons for Methodios’ declining the offer, related to the composition of the Holy Eparchial Synod in American at the time.

Elpidoforos asked Hierarchs to support his candidacy, while also campaigning with high-ranking members of the Greek government,  powerful publishers, Archons, and benefactors of the Patriarchate  in Greece.

It should be noted here that Patriarch Bartholomew’s words do not amount to a conclusive decision, but rather an attempt to test Elpidoforos’ candidacy.

Elpidoforos has promised Bartholomew that he will solve the Patriarchate’s economic problems once and for all. The hierarchs, priests, and general employees, for instance, have not been paid for three months now.

Well-respected Greek-Americans, who choose to remain anonymous, told TNH that Elpidoforos would be a risk, drawing parallels to Demetrios’ predecessor, Archbishop Spyridon.