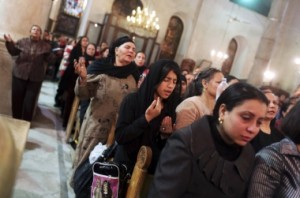 Reuters
Egypt has in the past been plagued by sectarian violence, but Christians and Muslims have united in the wake of brutality perpetuated by Islamic State.

Muslims in Egypt have donated money towards the building of a Coptic church in Al Manufiyya, north of Cairo, signalling another step towards solidarity in a country previously divided along sectarian lines.

Coptic Orthodox Bishop Benyamin, of the Diocese of Al Manufiyya, began a collection of donations for the church, which will be dedicated to the Virgin Mary. According to Fides news agency, a number of Islamic leaders in the area encouraged local Muslims to contribute; a suggestion that was taken up most eagerly by young people and children.

Pleased with the success of the initiative, Bishop Benyamin has urged other communities to follow suit, and said there is a message to learn from the way that Christians and Muslims are working together.

Though Egypt has in the past been plagued by sectarian violence, members of both faiths have been making a concerted effort to unite in the wake of brutality perpetuated by Islamic State in the Middle Eastern region.

Muslim president Abdel Fattah Al-Sisi visited St Mark’s Cathedral in Cairo on the Coptic Christmas Eve, becoming the first of the country’s leaders ever to attend a Coptic Christian mass.

Standing next to Pope Tawadros II, head of the Coptic Orthodox Church of Alexandria and the highest Coptic authority in Egypt, Al-Sisi told the congregation: “Throughout the years, Egypt taught the world civilization and humanity, and the world expects a lot from Egypt during the current circumstances.

“It’s important for the world to see this scene, which reflects true Egyptian unity, and to confirm that we’re all Egyptians, first and foremost. We truly love each other without discrimination, because this is the Egyptian truth.”

There were concerns that these efforts could be undone when ISIS murdered a number of Egyptian Christians earlier this year, however. A video was released by the jihadist group in February, purporting to show 21 men, “people of the cross, the followers of the hostile Egyptian Church” according to a subtitle, being beheaded by masked militants in Libya.

Ramen Atallah of Bible Society Egypt said that though ISIS may have hoped to capitalise on religious divisions in Egypt, the killings actually served to unite people of different faiths in the country.

“Christians have responded by sorrowfully calling out to God, and Muslims have shown love and care towards them,” he said.

Last week, it was announced that priests and Imams in Minya, the home province of those beheaded, are launching an initiative to encourage peaceful co-existence in schools.

Supported by the Grand Imam of Al Azhar, Ahmad al-Tayyeb, and Patriarch Tawadrow II of the Coptic Orthodox Church, religious leaders will meet with students to encourage a culture of tolerance and respect between those of different faiths.