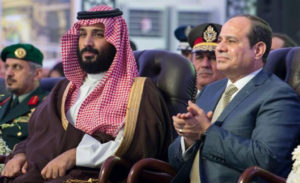 Egypt and Saudi Arabia have agreed to establish a $10 billion investment fund that will allow the Saudis to build a portion of their planned Neom megacity in parts of the southern Sinai.

The two countries signed the deal during the March 4 visit to Egypt by Saudi Crown Prince Mohammed bin Salman.

Egypt committed 1,000 square kilometers to the Neom project, which will run along the coast of the Red Sea as well as the Gulf of Aqaba and will extend across Egyptian and Jordanian borders, making it the first private economic zone to span three countries.

The megacity, part of the crown prince’s Vision 2030 strategy, is projected to cover a total of 26,500 square kilometers and Saudi’s government expects to invest $500 billion in the project.

The city will also pioneer new technologies such as automated driving, passenger drones and the use of robots to grow and process food.

Some 500,000 Saudis are currently residing in Egypt.

During his visit to Egypt, Crown Prince Mohammed became the first Saudi official to visit the spiritual center of Egypt’s Orthodox Christian community when he met with Coptic Pope Tawadros II at St. Mark’s Cathedral.

“Prince Mohammed spoke a lot of his affection for the Copts,” the Pope said, adding that the kingdom’s heir to the throne invited him and all Copts to visit Saudi Arabia.