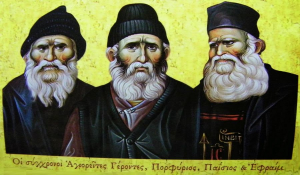 Elder Paisios the Athonite (1924-1994), one of the greatest and most revered Elders of the Orthodox Church of our time, is well-known for his spiritual teachings. His Holiness Ecumenical Patriarch Bartholomew announced that the Holy Mountain Elder will be formally canonized as a saint. Elder Amphilochios (Makris) of Patmos, Elder Sophrony (Sakharov) of Essex, Elder Ephraim of Katounakia and Elder Iakovos Tsalikis are anticipated to follow as well.

“The Orthodox Church serves a higher Truth, which has nothing to do with myths and speculations,” said His All Holiness, Bartholomew I, Archbishop of Constantinople, New Rome, and Ecumenical Patriarch, denying all rumors that claimed Elder Paisios wouldn’t be canonized due to his involvement in Greece-Turkey affairs.

Agioreitiko Vima, a website with reference to the authoritative Greek Portal Hellas-Orthodoxy, reports that Elder Paisios will be canonized within the next months.