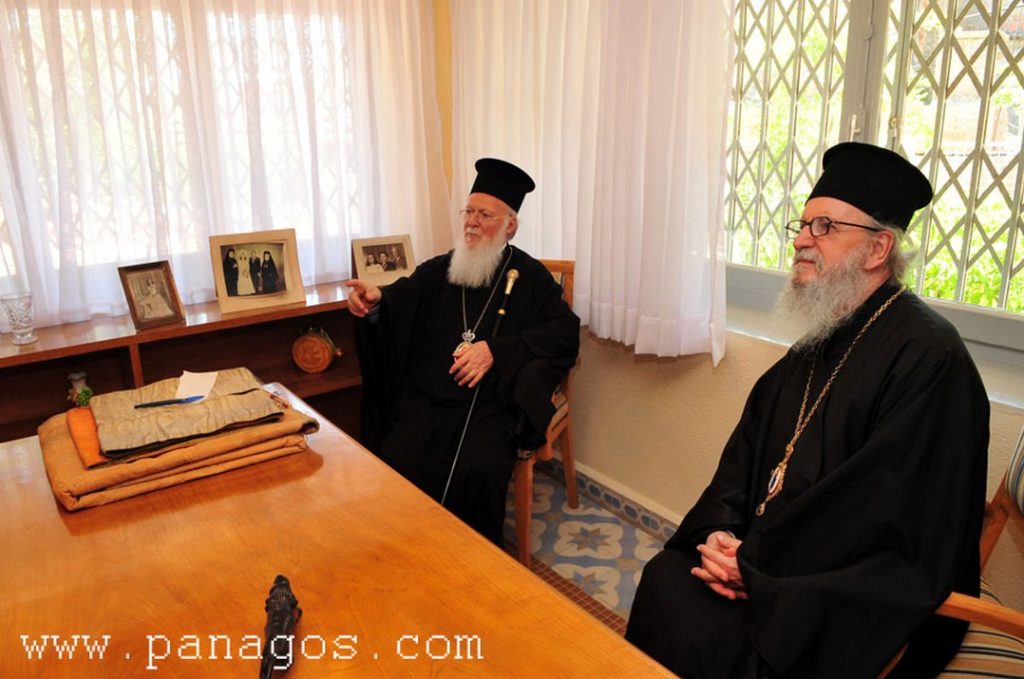 The Home of Former Archbishop Iakovos was visited by Ecumenical Patriarch and Archbishop of America Demetrios in 2010.

If the leaked information is true, the Holy Synod of the Ecumenical Patriarchate will convene October 9-11 in Constantinople to decide the replacement of Demetrios as Archbishop of America.

But similar information regarding the archbishop’s replacement also circulated at the previous two Synods, and despite that the information was confirmed insofar as Ecumenical Patriarch Bartholomew asked Archbishop Demetrios to resign, the latter not only refused to do so, but imposed his decision to stay.

If such were to happen a third time, for any reason at all, then one thing is certain: the Patriarchate’s authority in America will have suffered a severe blow.

About a year ago, the Herald published a commentary calling upon the archbishop to resign. We wrote, then: “There is no other solution than your resignation. Your stay will make things worse. And in the end, one way or another, you will leave, So, why submit yourself and your family to this?”
Our point of view – an admittedly difficult one from a personal standpoint – unfortunately was not heeded. And so now it has become more imperative than ever.

During the year that has passed, the crisis at the Archdiocese has deepened. Construction at the St. Nicholas National Shrine has halted due to a lack of money; a black cloud is hovering over the archbishop, and Greek-Americans are embarrassed.

Meanwhile, the community remains hostage to the archbishop’s whimsical delusions, that if given time, he can correct the situation: complete the construction of the Shrine, officiate at its opening, and then step down. If only that were possible; but it is not.

Obviously, the archbishop fails to realize that resolving the Archdiocese’s looming bankruptcy and completing the Shrine requires the trust of the people, and that can only be regained with new leadership at the helm.

In the year passed since this newspaper first revealed the Archdiocese’s financial crisis, the uncomfortable truth is that the patriarch and the community have placed greater priority on the archbishop’s good name than on the interests of the Patriarchate and the Greek America. They are all overly generous to Demetrios, to the point of endangering their own future.

Until when will this continue? What would be the point of one more extension of his tenure?
Absolutely none. We must end this drama, however difficult from a humanistic perspective, in order to enter a new era of Archdiocesan reconstruction.

But make no mistake: simply replacing the archbishop with someone new is not enough. It must be the right choice.

A prerequisite for restoring the community’s confidence in the Archdiocese is a detailed financial accounting of where the money went, who – if anyone – is responsible for this unprecedented and unacceptable situation, and how the Church will be compensated.

No matter what, this must not be covered up. The euphoria of a new archbishop should not obfuscate the need to resolve all of these lingering, difficult questions.

We need a reset – both spiritually and organizationally – of the Greek Orthodox Church of America. No archbishop ever again should say: “I did not know.”

The status quo is not good enough. The people demand a leader with vision, administrative skills, dynamism, and determination.

The new archbishop will be called upon to make difficult decisions that will be disliked by many holding power today. But if such decisions are not made, if the Church does not finally enter the 21st century in terms of organization, if it continues to treat transparency as a sin and covers up its clergy’s transgressions, then certainly the consequences it will suffer will be justified, uncontrollable, and swift.

All of this is almost asking the impossible. But this burden can be overcome if the next archbishop does not carry personal baggage; if he is given unequivocal authority to command necessary changes. If he is determined to put the Church on a path with new, strong foundations, clear organizational structure, and full transparency, all befitting the appropriate spiritual mindset.

In the aftermath of a series of wrong choices, the patriarch will be judged largely by his next choice for archbishop of America. The relationship between the Ecumenical Patriarchate and the Greek-American community is at stake.

Accordingly, there is longer room for error; the next archbishop will not have the luxury of failing.