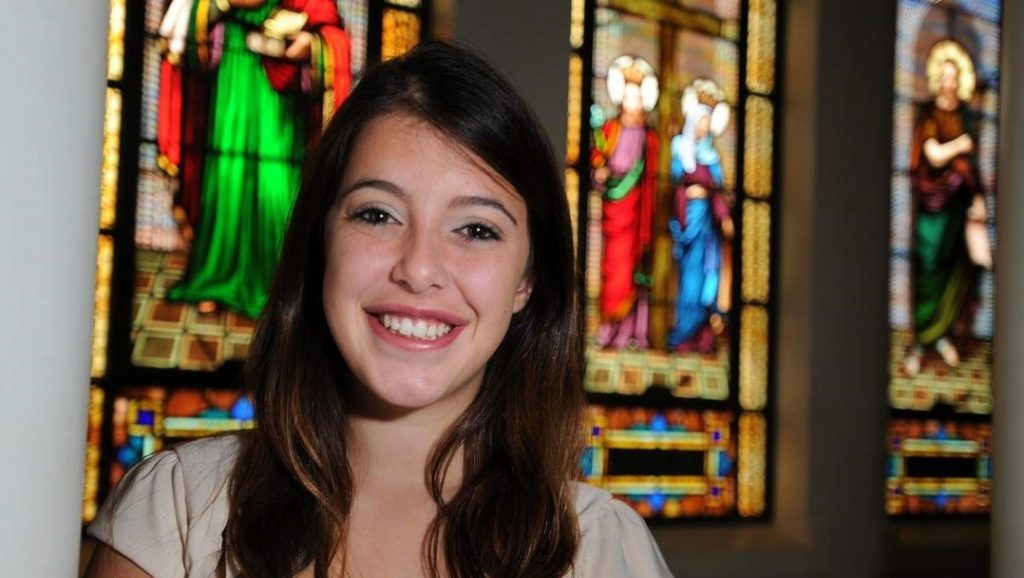 Joanna Theophilopoulos was the Epiphany dove-bearer in 2014, when this photo was taken at St. Nicholas Greek Orthodox Church. Now a student at Fordham, she would like to see girls able to dive for the cross. [Times files]

TARPON SPRINGS — For 112 years, a priest has cast a white cross into the Spring Bayou as boys in good standing with St. Nicholas Greek Orthodox Cathedral dived into the water for the chance to find it, the highlight of the annual Epiphany event celebrating the baptism of Jesus Christ.

Tradition says the one who emerges grasping the cross is rewarded with a year of blessings. In Tarpon Springs, the largest Epiphany celebration in the Western Hemisphere, boys have said even the chance to dive is the honor of a lifetime.

Sunday’s celebration will mark the 113th year girls are barred from diving to retrieve the cross with their male peers, making the Tarpon Springs parish one of the few — if not the only — Greek Orthodox churches in the U.S. that affords the honor only to boys.

And the 2019 celebration will remain segregated even after what is thought to be the most public and direct denunciation ever by a parishioner. Last year, Fordham University published an essay by student Joanna Theophilopoulos, a lifelong St. Nicholas parishioner and granddaughter of the church’s former priest of three decades, calling the male-only rule “arbitrary and theologically unjustifiable.”

Since the essay, Metropolitan Alexios Panagiotopoulos, a bishop over the southeast United States with the Greek Orthodox Archdiocese of America, confirmed he had spoken with members of St. Nicholas expressing his support for girls to participate for the first time this year. He said he did not remember the names of the individuals but that they were not anyone “of authority” at St. Nicholas.

“As a bishop, I don’t see a problem for girls to participate,” the metropolitan said, stating he is unaware of any other church in the U.S. that bars girls from diving. “I would like to see that. That’s a beautiful thing. I cannot demand that but if there was a petition I would say yes.”

St. Nicholas Rev. Fr. Athanasios C. Haros said he was not approached by anybody about allowing girls to dive this year. He declined to explain St. Nicholas’ rationale for banning girls from the dive or comment on whether it could change.

“The reasoning behind that is a matter for the parish family to discuss, not in the media,” Haros said. “We are asking God to bless the city. We are asking the Holy Spirit to come down and dwell within our community and we ask all of creation to be blessed. I think it’s unfair that the blessing from God is being overshadowed by the debates.”

Eastern Christian denominations celebrate Epiphany to commemorate the baptism of Jesus Christ by John the Baptist in the Jordan River and the manifestation of the Holy Trinity.

Along with a Mass Eucharistic service, the celebrations typically have a blessing of the waters and a daylong festival with food and dancing.

The ritual of throwing a cross into a body of water for divers to retrieve is an added “community building event around the liturgical rights of blessing of waters,” said George Demacopoulos, co-director of Fordham University’s Orthodox Christian Studies Center, the first and only of its kind at a research institution.

Unaware of any other Greek Orthodox churches that exclude girls from the diving, Demacopoulos said there is “no theological justification for the exclusion of women” from the event.

While priesthood is reserved for men in the Orthodox church, Demacopoulos said conflating girls diving for a cross in a para-liturgical celebration is “asinine.”

“Frankly it shows theological incompetence,” said Demacopoulos, also a Greek Orthodox seminary graduate. “I’m quoting the New Testament here. There’s neither male nor female but all are equal. So there is no question.”

Tina Chagaris, president of the Ladies Philoptochos Society at St. Nicholas, said the tradition had never been so publicly challenged before Theophilopoulos’ essay and that there has not been a groundswell within the community to include girls. She said girls have their own role in the Epiphany celebration: Every year one girl from the choir is selected to release a white dove before the cross diving to symbolize the Holy Spirit flying over the Bayou.

“There is a time and place for everyone and boys have their place, which is the diving, and the girls have the opportunity of the dove bearer, which was a great honor,” said Chagaris, whose daughter, Maria, was chosen as the dove bearer in 2017.

Theophilopoulos was chosen as the dove bearer in 2014, which she considered a high responsibility. But the fact she would never have the chance to dive for the cross was always in the back of her head growing up.

She said her grandfather, Father Tryfon Theophilopoulos, who died in 2005 when she was 8 years old after 30 years with St. Nicholas, always said he hoped she would become the first girl to dive for the cross when she reached the required age of 16.

Tryfon Theophilopoulos did not attempt to change the tradition to include girls while priest, possibly because there was never a drive from the community, said Rev. Fr. John Bociu, who served at St. Nicholas from 2003 to 2008.

“We are not acting on our own, we are spiritual leaders in the community,” Bociu said. “It’s a matter of the community, the traditions of the local church.”

But while studying at Fordham last year, Theophilopoulos said she was inspired to speak out about “gender-based discrimination” in her hometown church, the most watched Epiphany event in the western hemisphere, after talking about the tradition with her professor, Demacopoulos.

“I think our church particularly, and a lot of churches, have had a hard time keeping young people interested in wanting to be involved so I just don’t really understand why we’d continue a tradition that excludes half the youth from it,” said Theophilopoulos, who is majoring in biology and minoring in theology after graduating from Tarpon Springs High School as valedictorian in 2015. “There’s a lot of people who really value traditions even though those traditions aren’t backed by sound theology.”

Reactions to her piece were mixed, she said.

Family, friends and some strangers cheered her for standing against what should have changed years ago, she said. Some classmates mocked her on Twitter, one writing it was “the dumbest article” about a change that will “never happen.”

But Theophilopoulos is hopeful. She looks at women like her mother, Ellyn, a doctor and lawyer who showed her there is nothing women cannot achieve.

“I think people are nervous it could happen and will keep fighting it,” she said. “But I think it could. I definitely think it should. I think it’s just going to take more education and just having more conversation.”