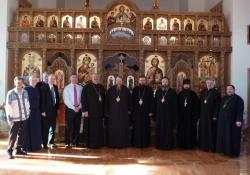 The Committee reviewed and recommended changes to the existing Terms of Reference for Canonical Regional Planning, reviewed the extensive statistical and demographic work performed by Alexei Krindatch, and discussed other ecclesiastical and planning issues. Three separate subcommittees were established, each headed by a hierarch and containing two or three consultants, respectively, to: (1) develop a draft global vision and principles for a united church administration, (2) list the present canonical and liturgical issues impacting the common life of the church, and (3) document the various ecclesiastical and governance structures of the member churches in the USA. These efforts will be undertaken in cooperation with other Assembly Committees, such as Canonical Affairs, Clergy Affairs, Liturgy, etc., with initial results to be reviewed by the entire Committee for Canonical Regional Planning in early April.