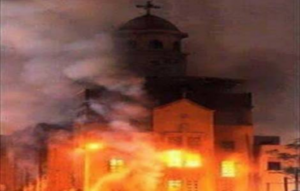 At least seven Orthodox churches have been attacked and set on fire, and six priests and several faithful have been killed in the Somali region of Ethiopia.

Clashes began at the end of last week, when armed men of the Liyu militia, of ethnic Somali and under the orders of Abdi Illey (President of the Somali Region) tried to interrupt a meeting between members of the regional parliament and representatives of the city of Dire Daua, with the intent of denouncing the violation of human rights in the region.

The spiral of violence also accentuated the contrasts between the regional administration and the government of Addis Ababa. The regional governor Abdi Illey has resigned and has now been arrested and placed in custody by the authorities of Addis Ababa.

Patriarch Matthias I and the Holy Synod of the Tewahedo Orthodox Church of Ethiopia have called for 16 days of fasting and prayer before and after the liturgical solemnity of the Dormition of St Mary Mother of God – celebrated on August 15, to pray for peace and reconciliation in the Somali region.

This part of the country has been unstable for some time. Prime Minister Abyi Ahmed, wanted to make his first visit to the area of the country after taking office at the beginning of last April.

According to official sources of the Tewahedo Orthodox Church, more than 20,000 displaced Ethiopians are being supported and assisted by the Orthodox parishes of Jijiga.

The Tewahedo Orthodox Church of Ethiopia, led by Abuna Matthias I, is one of the few indigenous churches and in Sub-Saharan Africa. It is in communion with the Coptic Orthodox Church. “The key to unity among the Churches today, lies in the ecumenism of the martyrs” Abuna Matthias told the Ethiopian Patriarch after meeting Pope Francis in Rome on February 29, 2016.