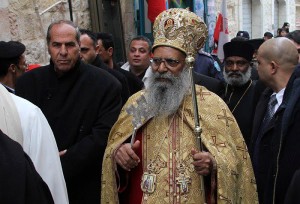 Visit to strengthen ties between the churches of the two countries. Ethiopia and Egypt are in the middle of diplomatic rapprochement following tension over the building of a multi-billion dollar hydroelectric project Addis Ababa is building on the Nile.

Patriarch of the Ethiopian Orthodox Church Abune Mathias is set to leave for Cairo on Saturday on a visit to Egypt.

“The visit will further strengthen existing relation between the churches of the two countries and enhance people-to-people ties,” Ethiopian ambassador to Egypt Mohamoud Dirir told The Anadolu Agency by phone.

“The two churches have an ancient history and have played a big role in peace and development efforts in Africa,” he said.

The diplomat added that “The relation between Ethiopia and Egypt is not new. They have an old historical relation.”

During the visit, the Ethiopian Patriarch is scheduled to hold talks with the Pope of Egypt’s Coptic Orthodox Church and senior government officials.

He is also expected to deliver a speech on relations between the Ethiopian and Egyptian churches.

“Currently, the relation between Ethiopia and Egypt is getting strengthened and they are building trust,” the ambassador said.

“The Ethiopian public diplomacy delegation recently sent to Egypt contributed to building trust between the two countries,” he added.

Ethiopia and Egypt are in the middle of diplomatic rapprochement following tension over the building of a multi-billion dollar hydroelectric project Addis Ababa is building on the Nile.

Egypt says the project will negatively affect its share of water from the Nile – its only source of water – while Ethiopia says the project is indispensible for its own national development and the economic welfare of its growing population.

Abune Mathias was enthroned as the 6th Patriarch of the Church in March 2013. He succeeded Abune Paulos, who died in August 2012.

Last April, the Patriarch was scheduled to visit Cairo but the visit had been postponed indefinitely.

The Ethiopian patriarchs had been consecrated by the Egyptian Coptic Pope in Alexandria until the Ethiopian church began to take over the affairs of patriarch in 1959.