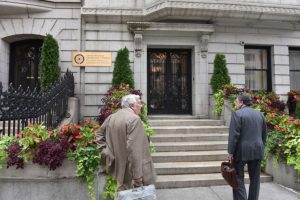 NEW YORK – In a lengthy and at times tense emergency meeting of the Executive Committee of the Archdiocesan Council of the Greek Orthodox Archdiocese of America on September 19, the existence of an $8.5 million deficit, as The National Herald had previously reported, was officially announced, as was that the Archdiocese’s finances were mismanaged for years.

His Eminence Archbishop Demetrios Geron of America and Council Vice Chair George Tsandikos did not respond to TNH’s request for comment.

The emergency meeting notwithstanding, the Archdiocese had already taken steps in the last few months to salvage the situation through the efforts of new Executive Committee officials.

Recently, the Archdiocese dismissed Jerry Dimitriou, who was Executive Director of Administration for over 18 years. His responsibilities were assumed by Archdiocesan Chancellor Bishop Andonios of Phasiane. Dimitriou also did not respond to TNH’s request for comment.

In April, the position of Chief Financial Officer was created and filled by finance and accounting expert Fr. Soterios Baroody. Almost immediately thereafter, actions were taken to reduce operating costs and to bring revenues and expenditures into alignment with the objective of eliminating the deficit. Also, controls have been implemented to ensure efficient expenditures and overall administration.

The accounting firm Grant Thornton was retained to conduct a thorough review and to provide recommendations on how to create a sound institution moving forward.

Also stated at the meeting was that a way should be found to pay off the deficit, but the difficult task is how to present the problem to the parishes and their congregants throughout the country. TNH has learned that there are already instances of parishioners having substantially reduced their annual contribution. A Texas church’s parish council president recently commented that about 200 families have yet to make their 2017 contributions.

Much of the blame was placed on Dimitriou for lack of transparency. But a hierarch of the Holy Eparchial Synod indirectly but clearly placed blame on Archbishop Demetrios about the entire problematic situation, and also on Finance Committee President George Vourvoulias and his group. The hierarch said it is unfair to place all the blame on Dimitriou, confronting Vourvoulias: “what have you done all these years?” In an attempt to defend himself, Vourvoulias, who has led the Finance Committee since 2006, said “we did whatever we could. We made the Archdiocese bigger, from a $12 million to a $30 million budget for the support of its ministries and programs.”

Regarding the recent layoffs of large numbers of employees, a hierarch protested, commenting that those people have families. Another hierarch complained about the dismissal of so many employees from the IT and digital media department.

Also discussed was “the newspapers” – meaning, this one – who “know Archdiocese matters better than we do” – and it was decided that some announcement would be made. At press time, there was no press release.

The Committee also decided that the deficit would again be discussed in the full session of the Archdiocesan Council on October 20 at the Marriot Marquis Hotel in New York.

Mention was made about the next Clergy Laity Congress, to be convened in July and probably in Boston, MA, although no official decision was made. The issue will be discussed at the October 20 meeting as well.