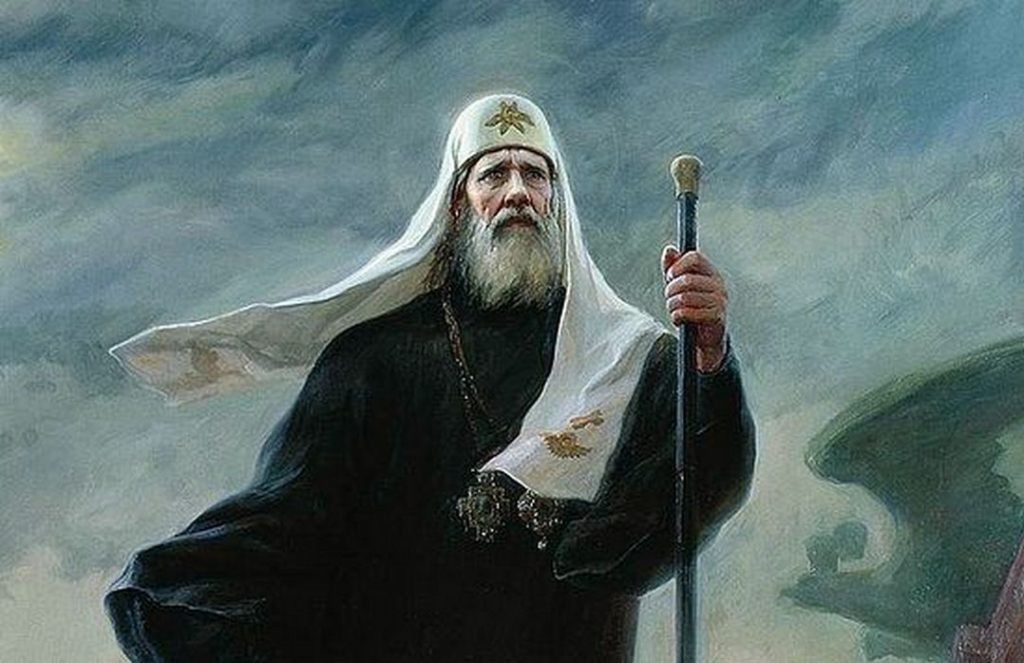 Our father among the saints Tikhon of Moscow, Enlightener of North America, was Patriarch of Moscow and All Russia. While in America, he established his cathedral in New York City, and presided over a vast archdiocese, encouraging and authorizing many publications in the English language. Among these, he encouraged the translation of the Eastern liturgy into English by Isabel Florence Hapgood, and he wrote an extensive catechism based on the Nicene Creed and the Our Father.

Given on the Sunday of the Triumph of Orthodoxy, during Great Lent in 1907, St. Tikhon of Moscow’s Last Sermon during His Years of Ministry (1898 to 1907) as the Archbishop of the American Missionary Diocese of the Russian Orthodox Church. This translation is of the text as it appears in the Russian-American Messenger.1

by St. Tikhon of Moscow

This Sunday is called “The Sunday of Orthodoxy” or “The Triumph of Orthodoxy,” since on this day the Holy Church solemnly commemorates her victory over Iconoclasm and other heresies. And this triumph of Orthodoxy took place not just a thousand years ago. No – for due to the mercy of God, the Church up to this day, now here and now there, gains victory and is triumphant over her enemies – and she has many of them.

It is not a coincidence that the Church is likened to a ship, sailing amidst a ferocious, stormy sea that is ready to drown it in its waves. And the further the ship sails, the harder the waves slam against it, the fiercer they attack it! But the harder the waves hit the ship, the further they are thrown away and rejoin the abyss and disappear in it, and the ship continues its triumphant sailing as before. For

since the Church of Christ is built on an immovable rock, and

The Church of Christ is the kingdom not of this world. It does not possess any of the attractions of the earthly world. It is persecuted and slandered. Yet it not only avoids perishing in the world but grows and defeats the world! This happens everywhere, and here in our land as well.

“We cannot but speak the things which we have seen and heard” (Acts 4.20).

It is true that our Church here cannot boast of the quantity of its members, neither of their erudition. Just like the

for some, it seems lowly and contemptible, and for others, it seems simple and foolish, but in reality

are concealed in it. It is strong and rich with the authenticity of the doctrine which has been preserved unaltered, with full adherence to the guiding regulations of the Church,3 a deep sense of liturgical service, and a plenitude of grace. And with all of this, it is gradually attracting the hearts of people, and it is growing and getting stronger more and more in this country.

You brethren have witnessed and seen for yourselves the growth and strengthening of Orthodoxy here. Just a mere twelve to fifteen years ago, we, aside from faraway Alaska, barely had any churches here. There were no priests, and the Orthodox people numbered only in a few dozens and maybe a few hundreds.4 And even they lived dispersed, far from one another.

“The Orthodox are seen this day in this country.”5

Our temples appear not only in big cities but in obscure places as well. We have a multitude of clergy, and tens of thousands of faithful – and not only those who have been Orthodox for a while, but those who have converted from among the Uniates. Schools are opened, the brotherhoods are established. Even strangers acknowledge the success of Orthodoxy here. So how can we ourselves not celebrate “The Triumph of Orthodoxy,” and not thank the Lord who helps His Church!

But it is not enough, brethren, only to celebrate “The Triumph of Orthodoxy.” It is necessary for us personally to promote and contribute to this triumph. And for this we must reverently preserve the Orthodox Faith, standing firm in it in spite of the fact that we live in a non-Orthodox country, and not pleading as an excuse for our apostasy that “it is not the old land here but America, a free country, and therefore it is impossible to follow everything that the Church requires.” As if the word of Christ is only suitable for the old land and not for the entire world! As if the Church of Christ is not “catholic”!6  As if the Orthodox Faith did not “establish the universe”!7

Furthermore, while faithfully preserving the Orthodox Faith, everyone must also take care to spread it among the non-Orthodox. Christ the Savior said that having lit the candle, men do not put it under a bushel but on a candlestick so that it gives light to all (Matt. 5.15). The light of the Orthodox Faith has not been lit to shine only for a small circle of people. No, the Orthodox Church is catholic;8 she remembers the commandment of her Founder,

We must share our spiritual richness, truth, light, and joy with others who do not have these blessings. And this duty does not only lay upon the pastors and the missionaries but on the lay persons as well, since the Church of Christ, according to the wise comparison of the Holy Apostle Paul, is the body, and every member takes part in the life of the body. By means of all sorts of mutually binding bonds which are formed and strengthened through the action of every member according to his capacity, the great Church body receives an increase unto the edifying of itself (cf. Eph. 4.16).

In the first centuries, it was not only the pastors who were tortured, but laypersons as well – men, women, and even children. And it was laypeople likewise who enlightened the heathen and fought heresies. And now, in the same way, the spreading of the Faith should be a matter that is personal, heartfelt, and dear to each one of us. Every member of the Church must take an active part in it – some by personal podvig9 spreading the Good News, some by material donations and service to “the needs of the holy persons,” and some by profuse prayer to the Lord that He

“keep His Church firm and multiply it”

– and concerning those unaware of Christ, that He would “proclaim the word of truth to them, open to them the Gospel of Truth, and join them to the Holy Catholic and Apostolic Church.”10 I have told this numerous times to my flock. And today, upon my departing from this land, I once more command all of you to preserve and act upon this, and especially you brethren of this holy temple.

You witnessed yourself last Sunday that

“The foreknowledge of God drew you closer to the bishop’s cathedra, and that the awareness of this closeness elevates your Christian spirit and edifies the nature of your undertakings, inspiring you for everything good.”11

Your temple is a Cathedral. It is preeminent in the diocese. And being its parishioners, you brethren must give others an example in everything good that concerns the life of the Church, including caring for the Orthodox Faith.

Furthermore, your parish is Russian, almost entirely consisting of people who came from Russia. And to this very day, Russia has been famous as a holy Christian land, whose adornment is the Orthodox Faith, the piousness of her people, and her temples of God. So brethren, uphold here in a foreign land the glory of your motherland. Manifest yourselves before the non-Orthodox as the Russian Orthodox people.

I can say with comfort that in these days, with your zealous attendance at our temple, you’ve made a good impression on the local residents. And you have especially gladdened my heart and expelled the sadness and grief which was felt not only by me in other places at the sight of empty temples during the feast day Church services.

May the Lord strengthen you to excel in the Orthodox Faith more and more – my last prayer is about this . . . Today I depart from you. And so, farewell, fathers and brethren of this holy temple, who are close to me not only in spirit but in our joint prayers, labors, and residence! Farewell to you, the rest of my flock scattered across the wide horizon of this land! Farewell, all those of you wandering in the deserts, working in the mountains and in the depths of the earth, and those on the islands far out in the sea!

Farewell to you, my Cathedral temple! You are dear and close to me. It has been during the time of my service that you were opened, you were adorned during my time as well, and you were made a cathedral during my time.

Perhaps for some who have seen the large, magnificent temples in Russia, you might seem small and modest, and you do not shine with gold and silver and precious gemstones like those temples do. But for Russian Orthodox people, who suffered here for a long time without a temple, you represent a precious treasure, and they rejoice that they have you – like the Jews who returned from the Babylonian captivity rejoiced at the time of the construction of the second temple, even though it was not as splendid as that of Solomon.

“Oh Lord, the God of Israel! May Thine eyes be open toward this house night and day, that Thou mayest hearken unto the prayer of Thy people when they shall pray in this place! . . . Moreover, concerning a stranger that is not of Thy people, when he shall come and pray in this house, hear Thou him from Heaven, Thy dwelling place!” (3 Kingdoms 8.26-27, 39-41).12

Farewell to you, this country! For some you are the motherland, the place of birth; for others you gave shelter, work, and well-being. Some received the freedom to profess the right Faith in your liberal land. God spoke in ancient times through the prophet, \

“And seek the peace of the city whither I have caused you to be carried away captives, and pray unto the Lord for it: for in the peace thereof shall you have peace” (Jer. 29.7; Hebrew text).

And so, let us pray to the Lord that He send this country

“a plenitude of the earthly fruits, fair weather, timely rain and wind, and preserve it from the cowardly, flood, fire, sword, invasion of foreigners, and civil strife.”

Let God’s blessing be upon this country, this city, and this temple. And let

“the blessing of the Lord, with grace and love for man,”

rest upon you all,