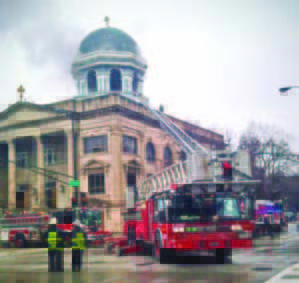 Parishioners at St. Basil Greek Orthodox Church must worship elsewhere during repairs to the fire-damaged church at 733 S. Ashland Ave.

Fr. Panteleimon Dalianis said that, for the first three Sundays after the fire, the church would hold services at the Chicago Marriott at the Medical District, 625 S. Ashland Ave., just north of the church. St. Basil’s is seeking another location in case it takes longer than three weeks to mend the damage.

He added St. Basil’s definitely will repair its building, although the church needs donations for the work. More information can be found at www.stbasilchicago.org/donate.

Fire broke out in the church March 18 from an undetermined cause, Chicago Fire Department spokesman Will Knight said. It caused no injuries.

Church officials said the structure had “serious” damage from smoke and water. Most damage occurred on the nave’s northeast corner, although the fire also spread to part of the balcony. Fire damage also affected several wall icons, the pulpit, and two stained glass windows.

Knight said the fire began in the kitchen. Firefighters extinguished the flames in less than a half-hour after drilling holes in the roof for ventilation.

Built in 1910 as Anshe Sholom Synagogue, the structure became a Greek Orthodox church in 1927. Workers fully restored the church after fire struck in 1977.