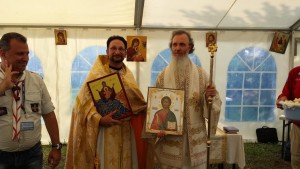 Metropolitan Ambrosios of Korea serving the Liturgy at the Jamboree with Fr. Eric G. Tosi.

Chaplains representing many different faith traditions—including Orthodox Christianity—ministered to an estimated 40,000 scouts from 160 countries at the 23rd World Scout Jamboree in Yamaguchi, Japan in mid-August 2015.

For the first time, the American contingent of over 1,900 scouts included an Orthodox Christian chaplain—Archpriest Eric G. Tosi, Secretary of the Orthodox Church in America and member of the Boy Scout’s Religious Relations Task Force.  A priest of the Moscow Patriarchate also ministered to Orthodox scouts from Russia.

Also present was His Eminence, Metropolitan Ambrosios of Korea of the Ecumenical Patriarchate, who celebrated the Divine Liturgy for some 300 Orthodox Christian scouts during his four-day visit.  DESMOS, the international Orthodox Christian scouting organization, maintained a popular booth that, for many scouts, provided their first exposure to the faith.

Held every four years, the Jamboree gathers scouts in fellowship and the spirit of scouting.  This year’s event concentrated on issues that unite scouts from around the world, especially global and environmental issues and the use of science and technology in the today’s world.  A component of the scouting program is the development of a cross-cultural understanding of faith and beliefs.

“It was a unique experience to not only be in Japan but also to minister to the Orthodox Scouts from around the world,” said Father Eric, whose participation was made possible through funding provided by the Eastern Orthodox Committee on Scouting, the pan-Orthodox Scouting agency of the Assembly of Canonical Orthodox Bishops of the USA, and the OCA.  “It was especially moving to see so many Orthodox Scouts from different countries gathered for the Liturgy.  While the service was celebrated in English, Greek and Slavonic, everyone was united and it was a real witness to Orthodox worship to many other scouts who had never experienced the Orthodox Liturgy.”  [Information on the Eastern Orthodox Committee on Scouting may be accessed here].

“Other Jamboree highlights included the commemoration of the 70th anniversary of the dropping of the atomic bomb at the exact time it was dropped on Hiroshima—a powerful image at the site of such a world changing event,” Father Eric added.

Following the Jamboree, Father Eric traveled to Tokyo, where he served with His Eminence, Metropolitan Daniel of Tokyo and All Japan at the Cathedral of the Resurrection, popularly known as “Nikolai-do”—“House of Nicholas”—in reference to Saint Nicholas of Japan, Equal to the Apostles.