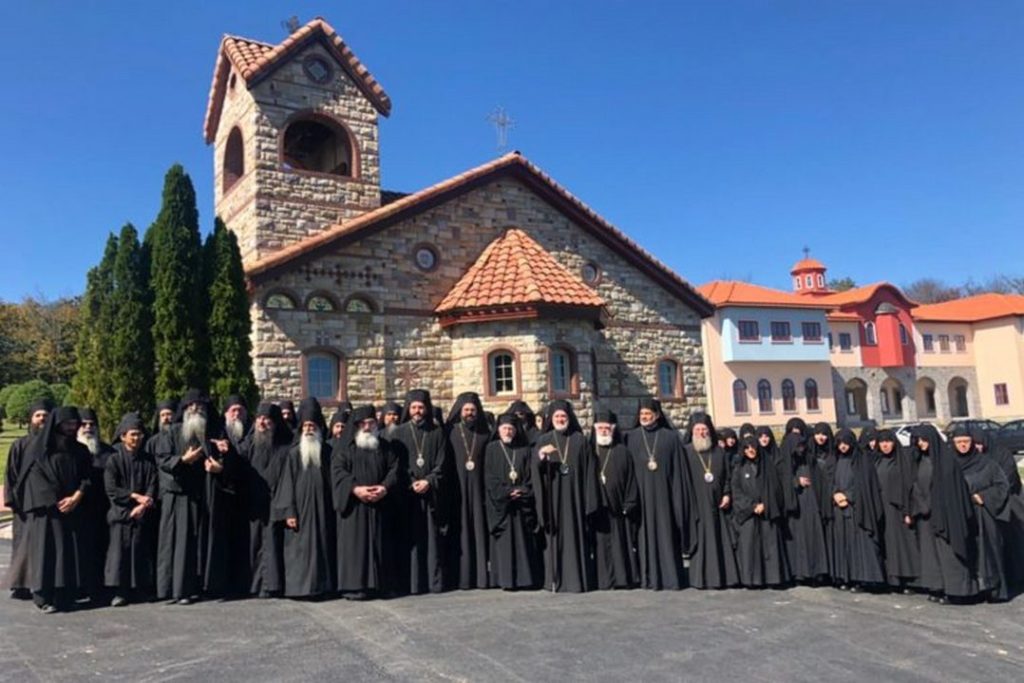 NEW YORK – The first ever Monastic Assembly of the Sacred Monasteries of the Holy Archdiocese of America convened on the invitation of His Eminence Archbishop Elpidophoros, September 21-22 at the Sacred Monastery of Saint Nektarios in Roscoe, NY concluded today.

Abbots and abbesses of 18 Sacred Monasteries of the Holy Archdiocese of America participated in this assembly. In addition, the following hierarchs attended: their Eminences Metropolitan Isaiah of Denver, Alexios of Atlanta, Nathanael of Chicago, and their Graces Bishop Demetrios of Mokissos, Apostolos of Medeia, and Bishop Ierotheos of Eukarpia, Abbot of the Sacred Patriarchal and Stavropegial Monastery of St. Irene Chrysovalantou.

His All-Holiness Ecumenical Patriarch Bartholomew blessed the Assembly with an inspiring video message in which he congratulated the Archbishop for his initiative and encouraged him to continue to promote and support the blessed Orthodox Monasteries in the USA. “Orthodox monasteries express Christian authenticity, ‘what is needed’ according to the faith concerning man and his eternal destiny, within the pluralistic, technocratic, and economically focused world of our age,” concluded the Patriarch in his message.

At the conclusion of the inspirational opening address of His Eminence Archbishop Elpidophoros of America—in which he made reference to the principles and values of the monastic life as angelic life and the observance of the word of the gospel—the following presentations were made:

The following points were raised during the discussions that followed:

The Assembly culminated with the festal celebration of the Divine Liturgy on Sunday, September 22 presided over by His Eminence Archbishop Elpidophoros of America together with the Reverend Abbots of the monasteries. In closing, thanks were expressed to His Grace Bishop Apostolos, Chief Secretary of the Holy Eparchial Synod, for organizing the Monastic Assembly. Gratitude was also expressed to the V. Reverend Archimandrite Joseph, Abbot of Sacred Monastery of Saint Nektarios and his sacred brotherhood, for their Abrahamic hospitality.