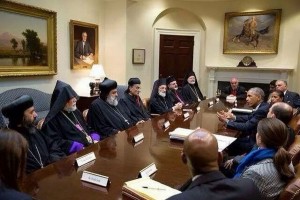 In Defense of Christians President Toufic Baaklinisaid, “We want to thank President Obama at this critical moment in history for meeting with the representatives of these Christian communities from the Middle East who face suffering and hardship for professing their religious beliefs.”

Attending the meeting with the President are:

His Eminence, Patriarch Mar Bechara Boutros Cardinal Raï
Maronite Patriarch of Antioch and All the East

His Beatitude, Gregorius III Laham
Melkite Greek Catholic Patriarch of Antioch and All the East, Alexandria and Jerusalem

His Beatitude, Ignatius Youssef III Yonan
Syriac Catholic Patriarch of Antioch and All the East

His Beatitude, Aram I Keshishian
Catholicos of the Holy See of Cilicia of the Armenian Apostolic Church

His Excellency Ibrahim, Ibrahim
Bishop Emeritus of Chaldean Eparchy of Saint Thomas the Apostle
(Official representative of His Beatitude Louis Rahphael Sako I, Chaldean Catholic Patriarch of Babylon and the Head of the Chaldean Catholic Church)