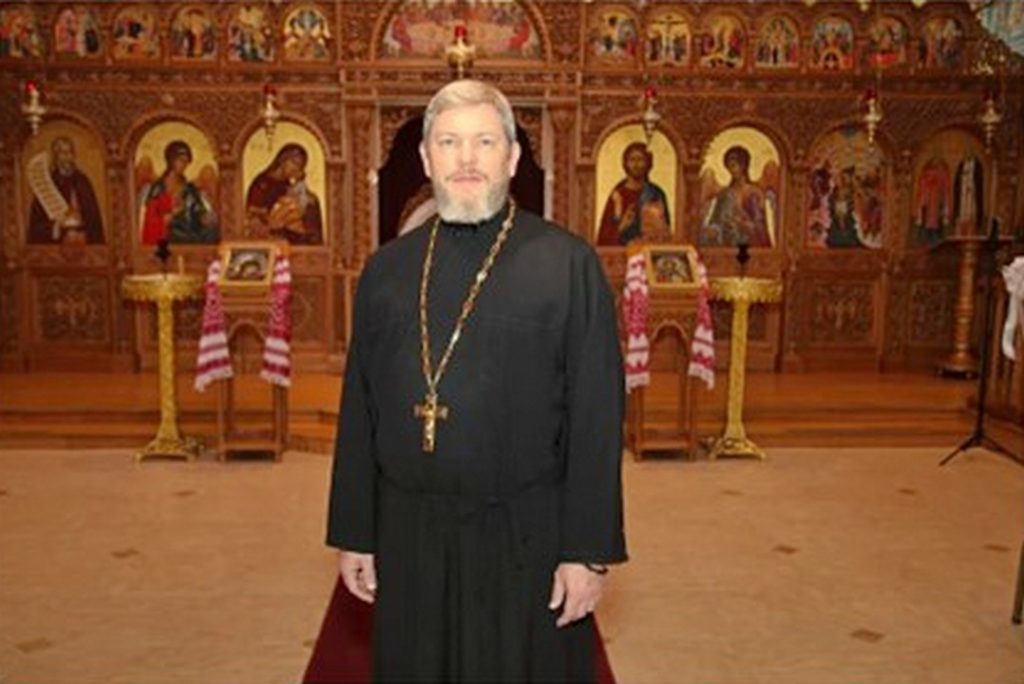 Christ the Saviour Cathedral, in Miami Lakes, Florida, founded by Russians and Ukrainians, now has a congregation that is more than 50 percent Hispanic.

“Since the beginning of 2022, we received into our parish 21 new members,” said Rev. Joseph Lucas, who since 2018 has overseen operations at the Miami Lakes neighborhood church. “This is unprecedented at our parish.”

More than 50 percent of its 200 members are now Hispanic, Lucas said, and others include Jamaicans, Guyanese, and more.

Orthodox drivers heading south on the harrowing 90-degree turn often take one hand of the steering wheel to cross themselves. This is not done out of fear. Rather, it is customary to do so when passing by an Orthodox church.

“I feel very welcome here,” said Gabriel Ruiz, 37, who works in the tech industry near Doral. “I was raised Catholic and didn’t connect with it, which led to a spiritual quest, and this church.”

Born in the Dominican Republic, Ruiz joined the church five years ago and sings tenor in the choir.

“It’s about the experience of worshipping God, Ruiz said. “The sights, sounds, and smells immerse one in worship.”

“In the Slavic tradition, the dome represents a candle flame which is the light of Christ,” Lucas said.

Above the dome is a Russian Orthodox cross with its distinct slanted line. Its upward slope reminds the faithful of the thief who repented while Jesus was crucified. The downward tilt points to the demise of the thief who did not.

Inside the temple, as air swirls about liturgical incense Orthodox theology is conveyed through Byzantine icons, and a 10-member acapella chorus recites hymns and songs of praise. An ethereal realm, not of this world.

Miami-Dade County has a population of 2,662,777, according to the Census. Of those who are religious, a Pew Research study said, 68 percent identify as Christians.

Less than 1 percent of this population are Orthodox Christians. Russians, Coptics, Greeks, and others within this subgroup often cling to long-held ethnic traditions of attending services alongside their peers in their native languages. Examples include the St. Vladimir Russian Orthodox church, at 101 Northwest 46th Avenue, in Miami. Founded in 1947 by a circus troupe called the Royal Russian Midgets, its parish is primarily Russian.

The St. John the Baptist Coptic Orthodox church is located at 7851 Riviera Boulevard in Miramar. Arabs could not pronounce the Greek word Aigyptios [Egyptian] so they abbreviated it to qubt, the Arabic word for Copt. Its parish is primarily Egyptian.

The St. Sophia’s Greek Orthodox church, at 2401 Southwest 3rd Avenue in was founded in 1948 in the Miami Roads section of Miami. The church conducts services mainly in Greek and the is mostly ethnic Greek.

Christ the Savior holds services only in English, and its congregation reflects the diversity of the community it serves.

“Like most of our parishes nationwide, we switched to the use of English in services,” Lucas said. “We also began focusing on missionary work.”

As part of its missionary campaign, the church conducts weekly Bible studies, collects canned goods for a soup kitchen, and supports the Miami-based Tree of Life Parenting Center.

The church’s mission is clear, according to its website: “Go into all the world and make disciples of all nations, baptizing them in the name of the Father, and of the Son and of the Holy Spirit.”

“Before my dad passed, earlier this year, Father Lucas took the time to visit him and blessed him with the tears from the Virgin Mary weeping icon of the Orthodox faith,” Miami Lakes Mayor Manny Cid told the Herald. “This was a very special moment for my family and one that we will never forget.”

“I recommend that everyone take a moment to visit this beautiful landmark in our community,” Cid said.

Share. Twitter Facebook Pinterest LinkedIn Tumblr Email
Previous ArticleOrthodox Youth and Young Adult Ministry Videos: How the Internet is Darkening our Minds and Hiding the Way to Holiness
Next Article New Book: The Oxford Handbook of the Bible in Orthodox Christianity