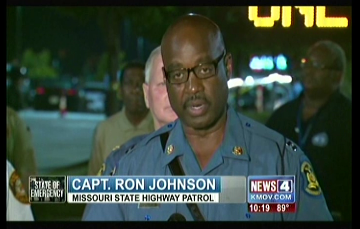 FOCUS has been featured on multiple TV stations in Ferguson, MO, where its St. Louis Center and FOCUS Director, Eric Shanburn, have been working to embody the “U” in FOCUS, which stands for “United” and “Understanding.”

The video is accessible at www.youtube.com/watch?v=fLkqpS8h240&feature=youtu.be.

“Eric and his team of Orthodox volunteers have spent time in Ferguson promoting discussion and understanding between the police and protesters,” said Larissa Hatch of FOCUS. “On Saturday, August 23, FOCUS hosted a community cookout that brought local shop owners—many of whom were victims of looting—protesters and authorities together.  In the past few nights, protests have been peaceful and there have been no arrests. Police and protestors alike have expressed their gratitude to FOCUS and Orthodox Christians for their role in reducing tensions.”

FOCUS hosted the meal to act as a turning point, sending a message of peace at a time of unrest.

“An important part of our work at FOCUS is promoting understanding,” Larissa said.  “FOCUS in St. Louis has always been deeply active in building community and relationships through our many programs that create jobs, provide housing and help homeless and disadvantaged children stay in school,” Larissa said.

FOCUS North America is a national movement of Orthodox Christians, united in faith and joined by a desire to provide action-oriented and sustainable solutions to poverty in communities across America. FOCUS has operations and youth volunteer experiences in more than 25 cities in the US. To learn more or to donate, visit www.focusnorthamerica.org or visit FOCUS on Facebook and Twitter.